Medical Care In Hawaii: Patients Of A Lesser God

Kona, Medical Care No Comments
Mahalo For Sharing Your Aloha

Medical Care in Hawaii, Big Island & Kona: Generally, the bigger the city, the more desirable the area, the easier it is to recruit physicians – Think Seattle, San Diego, San Francisco, etc. That is not necessarily true in Hawaii; mostly due to the cost of living here and the distance to the Mainland. 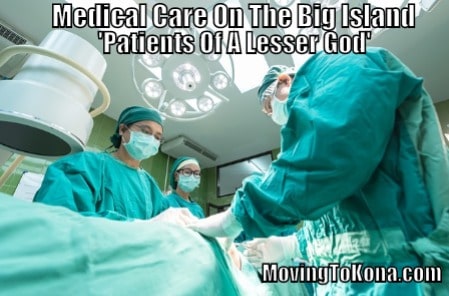 Patients Of A Lesser God: Not surprisingly, not all medical specialties are supported on the Big Island. If you have a medical condition that requires frequent visits to a specialist, you may have to reevaluate where you want to live and factor in the time and costs.

I had a minor condition that required a specialist. My only option was to fly from Kona to Kaiser Hospital in Honolulu for treatment. I joked with my physician that, especially on the Big Island (and the non-Oahu islands), I was a patient of a ‘lesser God.’

It took about seven hours of time from home to the airport to Honolulu and back again for a 30-minute office visit.

MedLinx reports, “The Aloha State has the highest cost of living of any of state (#50). Not surprisingly, it’s one of the states with the highest physician density (#41). The pay is middling (#32). On the upside, Hawaii ranks #1 for health care access and quality.

Hawaii News Now reports that “Hawaii has a shortage of doctors. And this year, that shortage got a little worse.”  Hawaii is still one of the worst states for doctors. The latest physician workforce survey found that the islands lost 51 full-time equivalent doctors from 2017 to 2018.

The total number of full-time doctors now stands at 2,927 statewide, or about 750 doctors short of what’s needed across all specialties.

The Big Island has the most severe shortage — at 41 percent. In Maui County and Kauai, the figure was about 33 percent.”

Why Are There Fewer Doctors In Hawaii? There are a number of factors contributing to the shortage of doctors in Hawaii: 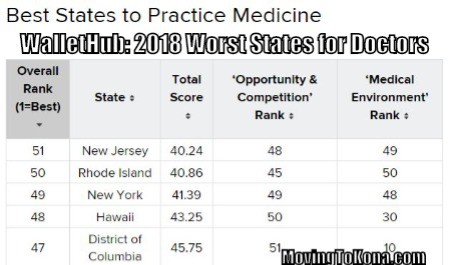 Aloha Tip: Due to a physician shortage, not all doctors (dentists and other medical providers as well) are accepting new patients.

Choosing Health Insurance Plan In Kona: We live in Kona and use Kaiser. I have a graduate degree in healthcare administration and I just like the fact that this HMO offers integrated medical services, especially for someplace so remote plus then important access to medical specialties. 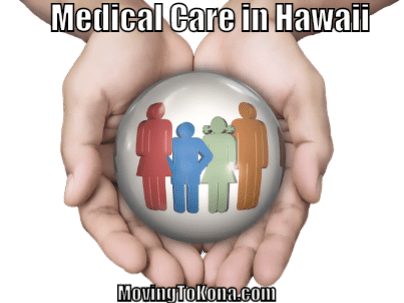 Aloha Tip: For serious conditions, Kaiser not only pays for your flight to Honolulu but if you are having a procedure done, they pay for your significant other to accompany you.

Aloha FYI: Kaiser and other medical care providers don’t make money by giving it away. I once had a work-rec team. It was in a co-ed volleyball league. One of my staffer’s husband worked as a claims adjustor for a major car insurance company. As I got to know him, he told me that he earns a bonus every time the customer accepts a payout lower than the suggested amount. I am not saying this happens, necessarily, in medical care, but the first option for Hawaiians might be the ‘cheapest’ solution before getting to more expensive options involving transportation and distance.

Aloha Tip: There are three urgent care centers in the Kailua-Kona area: 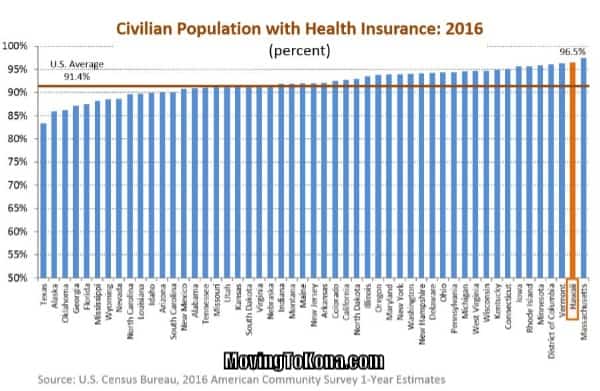 Hawaii News Now video report on “Hawaii has a shortage of doctors.”