Welcome To The Newest, Above Sea-Level, (former) Hawaiian Island

Hawaii has a (tiny) new baby (at least for now) island.  A robust plume (below, center) was observed July 12, 2017, at the southern end of the ocean entry, which had migrated about 985 feet to the west. 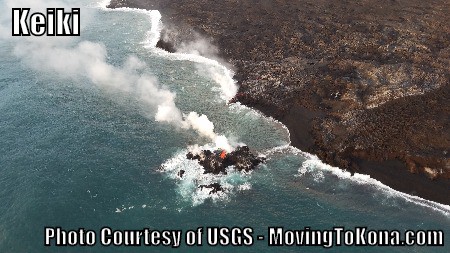 “No man is an island, entire of itself.” John Donne
“No island for man.” Pele

Videographer Mick Kalber released this video of an overflight of the East Rift Zone he took with Paradise Helicopters on Sunday, July 15, 2018.

Observations From The Scientists: This new island of lava has formed on the northernmost part of the ocean entry. The HVO field crew noticed the island was oozing lava similar to the lava oozing from the broad flow front along the coastline.

Update: Lava has filled in, and, while still rock, no longer an island.

Observations From The Visitors: Overheard, “At what times does the volcano erupt?” Tourist near the lava flow. 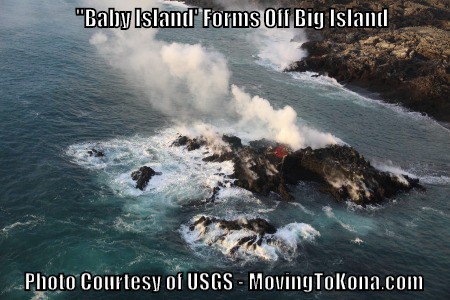 A closer view of the new ‘island,’ which was estimated to be just a few meters offshore, and perhaps 6-9 meters (20-30 ft) in diameter. It’s most likely part of the fissure 8 flow that’s entering the ocean—and possibly a submarine tumulus that built up underwater and emerged above sea level.

While most Hawaiian Islands formed the old-fashioned way, moving over a tectonic hot spot, it seems that Kīlauea and Pele (“I didn’t know I was pregnant,” to which Kīlauea said, “I better be the father!”) got together to produce this perky little offspring via a lava tube or similar underwater lava outflow.

I know, I know, I won’t even go into the sea-sarean section birth details.

Hawaii News Now: In a flight Friday morning, geologists confirmed that a small island has formed off Kapoho, where lava flows are cascading into the sea.

The Hawaiian Volcano Observatory estimated that the island is about 20 to 30 feet in diameter and just a few meters offshore.

It formed at the northernmost part of the ocean entry and is “oozing lava similar to the lava oozing from the broad flow front along the coastline.”

The observatory said that the tiny island is likely part of the flow from fissure no. 8 that’s entering the ocean.

It could also be a “submarine tumulus,” which built up underwater and emerged above sea level.

And from Big Island Now: During this morning’s overflight, HVO’s field crew noticed the island was oozing lava similar to the lava oozing from the broad flow front along the coastline.

A closer view of the new “island,” which was estimated to be just a few meters offshore, and perhaps 20 to 30 feet in diameter.

Read more from our site: The Mainlander And The Aloha Spirit – Kona Version on how we came to move to Kona.

“Life is an island. People come out of the sea, cross the island, and return to the sea. But this short life is long and beautiful. In getting to know nature man exalts the wonder and beauty of life.” Martiros Saryan

Video on how volcanic islands form are below.

From the National Geographic  – Draining the Pacific reveals a mountain larger than Everest and a new Hawaiian island on the rise.

Here are birth announcements from other proud volcanic parents:

In late December 2014 into early 2015, a submarine volcano in the South Pacific Kingdom of Tonga erupted, sending a violent stream of steam, ash and rock into the air. When the ash finally settled in January 2015, a newborn island with a 400-foot summit nestled between two older islands

This new Tongan island is the first of its type to be formed from the ash of a 2014 volcanic eruption in the south Pacific and could exist for decades, according to a study released by Nasa. The new land mass, unofficially named Hunga Tonga-Hunga Ha’apai, reaches a height of 120 metres and was originally only predicted to last months. Instead, Nasa now believes it will remain for between six and 30 years, making it the first island of this type to persist in the modern satellite era. The island has also given researchers insights into similar features in other parts of the solar system, including Mars

Iceland experiences volcanic eruptions every five years on average, and is one of the Earth’s most active volcanic areas. All islands there were created by volcanic eruptions about 5.000 years ago.
Only Surtsey, the most southern island, is younger. The island was formed after a volcanic eruption in 1963, and was already protected as a natural conservation area during its formation. For the 50th birthday of Surtsey, a TV-Team was allowed to visit the island and reports what the biologists and geologists could observe during the past century.

“Knowledge is an island surrounded by a sea of mystery.” Chet Raymo