No Hurricanes Hitting Hawaii?? You Say, “But I Saw On The News…” I know, I know – ironic isn’t it? A website that includes information on how rarely a hurricane hits Hawaii and I share hurricane updates with you.

The ‘Goldilocks’ Zone – Why Do So Few Hurricanes Approach Hawaii? The main reasons are:

Hawaii Sits In Its’ Own ‘Goldilocks’ Zone:  Much the same way earth sits just far enough away from the sun that our waters neither freeze or evaporate, Hawai’i is in a perfect location.

The weather temperatures are nice for humans – locals can fish, surf, dive, swim – but the ocean water isn’t too warm to optimally promote hurricane formation.

A Climate Word Of Warning: Towards the bottom of this post, we discuss how / why ‘climate change’ can increase the number of hurricanes approaching Hawaii if ocean temperatures and/or wind shear patterns change.

Just How Often Do Hurricanes Hit Hawaii?
(If you ask locals and visitors they will reply, “Too often, brah!”)

In reality, tropical storms, including hurricanes,  are relatively rare to make landfall in Hawaii. Having said that direct hits have impacted the Hawaiian Islands. The most devastating, recent was Hurricane Iniki that hit Kauai in 1992. Hurricane Iniki was a category four hurricane and had winds between 131 and 155 miles-per-hour. While Iniki was a category four hurricane, it was an unusual outlier in terms of strength and positioning, and the fact it hit Hawaii.

If you are reading this during hurricane season, you can visit the Weather Channel – Hurricane Central page for hurricane forecasts and predictions. 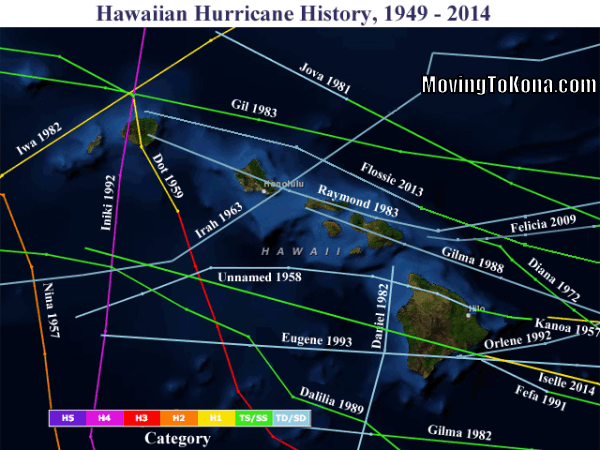 From the School Of Ocean And Earth Science And Technology – University Of Hawai‘I At Manoa.  Notice how the optimal ocean temperatures lie south of Hawai’i and the cooler, less conducive to hurricane formation, ocean water is to the north of Hawaii.

Does Three Degrees Really Matter? Here is how you know it matters – if you have a child, who should have a body temperature of 98.6 degrees, but a fever makes their temperature 101.6 degrees, you become extremely concerned. It is the same for ocean temperatures – an extra degree or two can make a substantial difference. 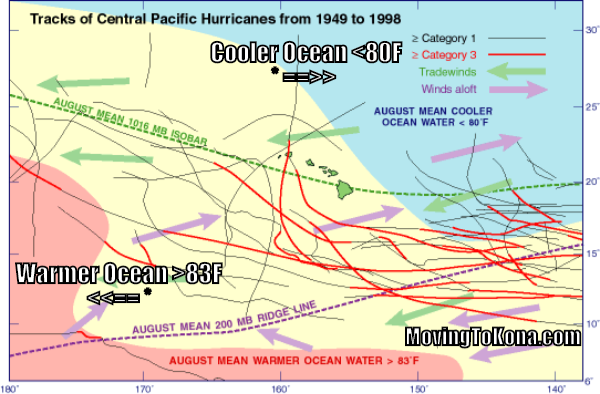 From Weather.com – notice how hurricane tracks generally come from south of Hawai’i (warmer ocean temperatures) and then curve northwards. 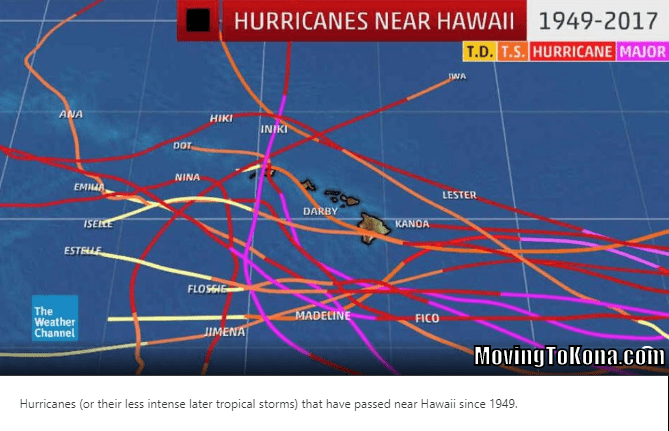 And this graphic from NOAA shows tropical storms and hurricanes passing within 200 miles of Hawaii since 1950 (up to about 2013). 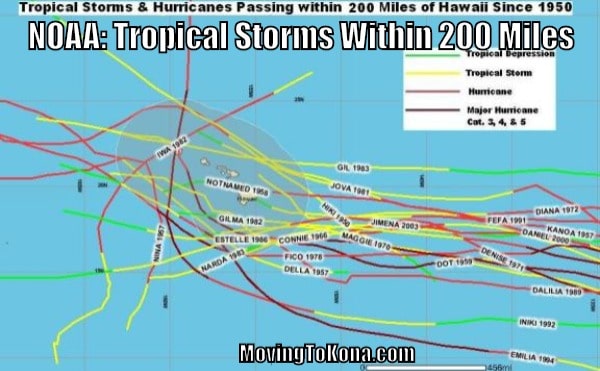 Just for a comparison, here are all North Atlantic tropical storms and hurricanes (1851-2006) (NOAA) 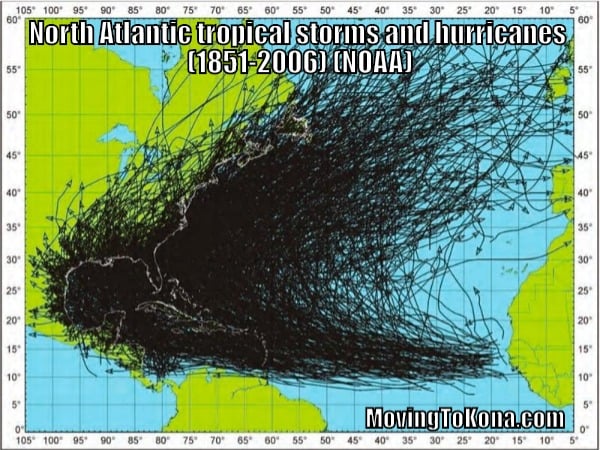 And a ‘side-by-side’ comparison via Wikipedia. You can see that Hawaii sits in a bit of a ‘hole.’ 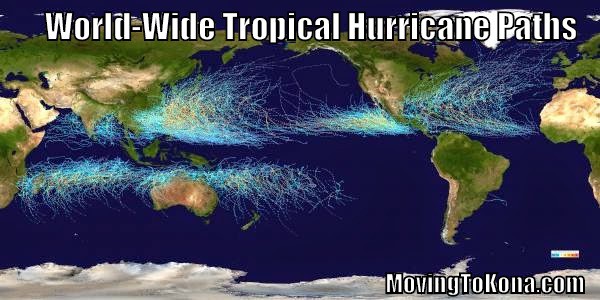 If you examine the path of historical hurricanes tracks shows that hurricanes move way north in the Caribbean and eastern Atlantic. The same holds for the western Pacific. But over the eastern Pacific they die quickly as they approach Hawaii.

Be sure to read Kona And The Pillars Of Pele?  Just why did Hilo and the eastern portion of the Big Island receive so much devastating rain during Hurricane Lane, while Kona had less than an inch and no winds?

What Months Are Hurricanes Most Likely To Hit Hawaii? 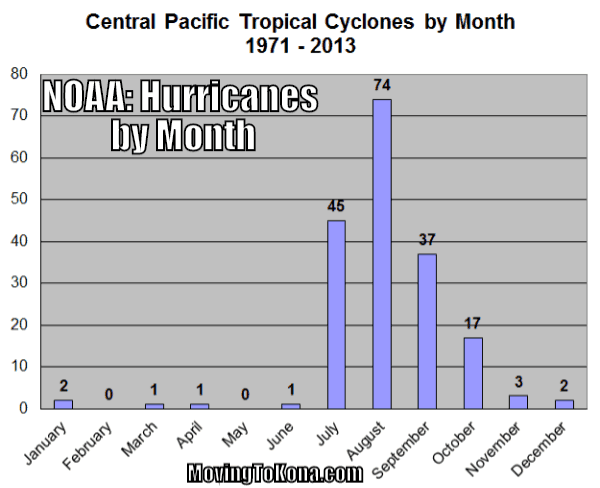 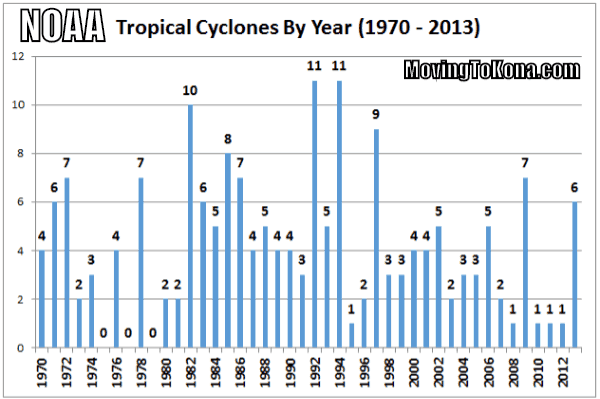 One last image to illustrate how unlikely a hurricane is to hit Hawaii. (Don’t let the volume of hurricane path lines slant your impression… most hurricanes miss Hawai’i).

08/27/2018 Here is the final path that Tropical Storm Lane, Hurricane Lane then back to Tropical Storm Lane has traveled. While never a direct impact, still caused substantial rain damage. Seems like it was a lot closer than this Weather Channel report indicates.

So, in short, Even though Hawaii sits at approximately the same latitude as the Caribbean, Hawaii has far, far fewer landfalls.

It’s those changes in latitudes, changes in attitudes
Nothing remains quite the same
With all of our running and all of our cunning
If we couldn’t laugh, we would all go insane
Changes in Latitudes, Changes in Attitudes
Click to hear the song by Jimmy Buffett

What Is It About Hawaii That Works Against Their Getting
Strong Tropical Storms And Hurricanes?

Baby, It’s ‘Cold’ Outside: The main reasons why few hurricanes hit Hawaii are that the ocean temperatures around the islands are generally too cool and there is often too much vertical wind shear, the change in horizontal winds with height.

The waters around the Hawaiian Islands are relatively cool, especially when compared to the  Caribbean.  Typically, winter water temperatures, near the shore, are in the mid-70’s and in the summer ocean temperatures, at the shore, can approach the low 80’s. Sea-surface temperatures are typically warmer the further south you get in the northern Pacific, which means a system moving toward Hawaii from the south would have a better chance of surviving to the islands. 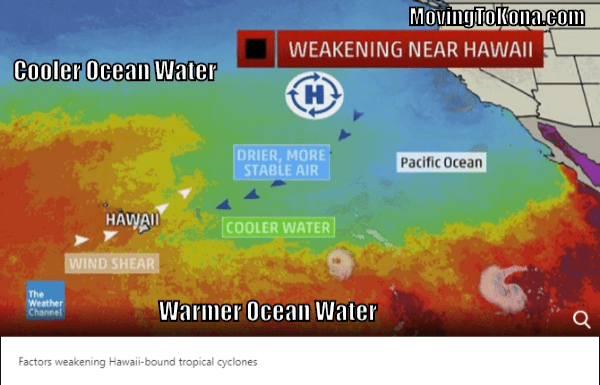 While the minimum temperature required for hurricane formation is 26C (79F), the offshore ocean water temperatures around Hawaii during the tropical cyclone season (mid-summer to early fall) are generally just too cool.

Wind Shear (Off With Their Heads): Wind shear is often the most critical factor controlling hurricane formation and destruction. In general, wind shear refers to any change in wind speed or direction along a straight line. Imagine a spinning hurricane with a stiff wind blowing across the top of the hurricane – it weakens, and steers, a hurricane.  Wind shear is when there’s a mismatch either in speed or direction between winds near the surface of the storm and those five to six miles up – this mismatch pushes the wind over the hurricane and ‘decapitates’ it. 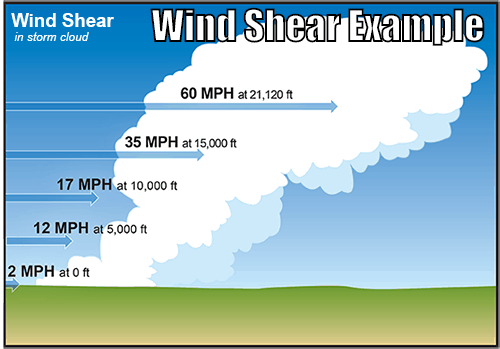 Below is a video showing winds going in opposite directions – shearing each other.

El Nino Hurricane Impact: Having said that the ocean temperature helps protect Hawai’i, here is news from Hawaii News Now, “Climate experts expect to see activity for a couple more months and there are several reasons why. They say because of global warming and higher water temperatures farther north, along with signs of El Niño, hurricanes are now following a new and more menacing route.

‘In other words, the major hurricane track, currently, is basically confined to the south of the Hawaiian Islands. But with the global warming, this track may be projected to shift northward,’ or closer to Hawaii, said Pao-Shin Chu, state climatologist and University of Hawaii meteorology professor.”

‘Shear’ Luck: There is considerable ‘Vertical Wind Shear’ that impacts the Hawaiian Islands. The change in horizontal wind with height is called vertical wind shear. Wind shear will often disrupt tropical storms. There is often a lot of shear near Hawaii, with easterly trade winds at low levels and westerly winds aloft.

“The Tropical Upper Tropospheric Trough (called TUTT for short) rules the high levels of our weather atmosphere there and creates winds typically too fast for development of a hurricane and too fast for an approaching hurricane from the east to remain a hurricane. That is why quite a few remnant tropical circulations go by south, north, or occasionally through the islands, but rarely does a tropical storm or hurricane [reach them].”

So the combination of warmer than normal sea surface temperatures and reduced wind shear has helped tropical storms to develop and approach Hawaii.

What About El Nino?

Hurricane expert Michael Lowry determined since 1950, there is a 13 percent increase in the chance of a named storm to track within 100 miles of the Hawaii islands during an El Niño year (35 percent chance) than a neutral year (22 percent chance).

Another possible side effect of El Niño is the trade winds that may keep tropical cyclones further south of the Hawaiian Island decrease their influence, which allows tropical storms to be drawn northward, towards the islands.

Be sure to view our Hawaii Hurricane Preparedness Checklist – 20+ Immediate Tips: ʻOhana Planning for Hurricane Safety.

Hey, This Web Page Is About Kona…
What About The Big Island And Hurricanes?

While the eight Hawaiian Island chain sits squarely in the tropical Pacific, hurricanes are actually pretty rare. At least in recorded history, some islands have never experienced a full fledged hurricane! The most southerly island, “Hawaii”, known as the, “Big Island” had been one of those until Hurricane Madeline became a tropical storm brushed the southern tip of the Big Island. 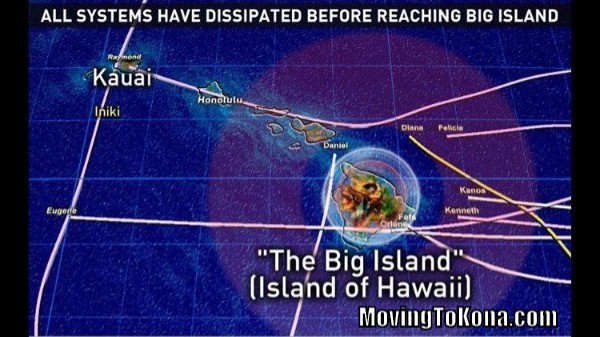 What About Climate Change, Hurricanes And Hawaii?

Climate Change And Hurricanes: Whether you believe that climate change is manmade or a natural weather fluctuation, any increase in ocean temperatures around Hawaii can result in a higher percentage of hurricanes impacting Hawaii. There are two main reasons for this:

You combine warmer ocean temperatures and less wind shear and you are going to have more hurricanes strike Hawaii.

This is the path Hurricane Iniki took in 1992. 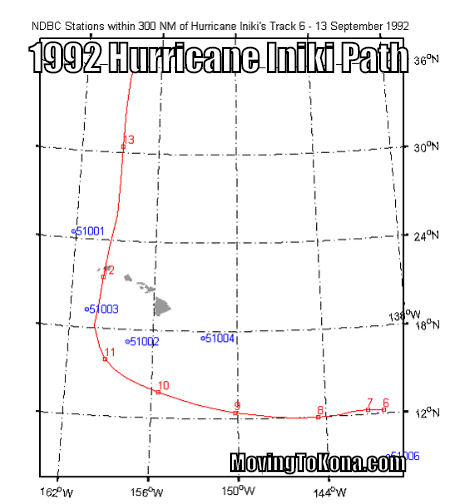 08/02/2018 Update From The Weather Channel: Hector Rapidly Intensifies Into a Hurricane in the Pacific Ocean, Has an Uncertain Future Next Week Near Hawaii