Kona And The Pillars Of Pele: The Kona Rain Shadow Effect

The Pillars Of Pele

First Things First – Just Why Is Kona So Dry? Three Pele-grown mountains protect Kona from the prevailing weather pattern, which originates predominantly from the east: Mauna Kea at 13,803 feet, Mauna Loa at 13,679 feet and Hualalai at 8,271 feet.

These large mountains form a large rain shadow which protects Kona from all sides except for weather from the west (and sometimes to the south). 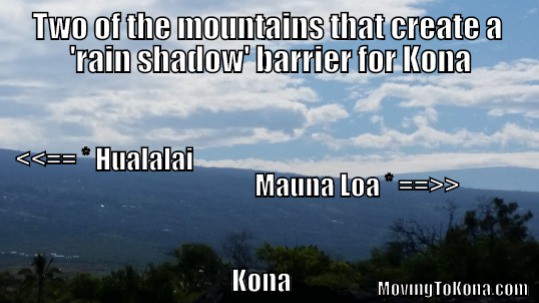 These pillars form a rain shadow for Kona. If rain-laden clouds want to pass from the east side of the Big Island to the west side, these clouds have to lighten in order to get over mountains. They do so by releasing rain. 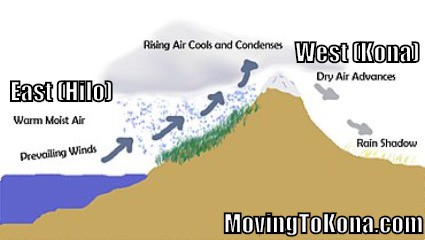 Thank you for liking our Moving To Kona Facebook page.

From Smithsonian.com: “Hawaii is a small target in the big ocean, so it just has to be really good timing and the conditions have to be right for us to get a direct hit,” Eric Lau, a meteorologist for the National Weather Service in Honolulu, told the Associated Press in 2014, when two hurricanes were barrelling toward at the islands (they missed).

Mary Beth Griggs at Popular Science also explains that for a hurricane to hit Hawaii it has to overcome some pretty stiff winds. Typically, an atmospheric wind pattern shifts the course of any storms heading towards Hawaii, acting like a force field.

“The major reason that Hawaii doesn’t normally get major hurricanes nearby is that there’s a strong subtropical high-pressure system that sits just to the north, and that acts to steer [storms] straight west,” Brian McNoldy, meteorologist and hurricane researcher at the University of Miami in Florida, tells Griggs.

The Pillars Of Pele: Hurricane Lane

The rain totals for Hurricane Lane were disastrous for much of the Big Island – many parts of the island had 30″++. But for Kona, we had, maybe, an inch of rain.

The Kona Rain Shadow –West Hawaii Today wrote an article on the low amount of rain, “National Weather Service Meteorologist Gavin Shigesato said, ‘Kona is kind of shielded from the regular trade winds. In that sense, maybe, that could have played a factor in why you guys haven’t received (hardly) any rain or wind.’

During the 24 hours preceding 9 a.m. Friday, sites in West Hawaii areas reported receiving no more than a half-inch of rainfall. Maximum wind speeds recorded Friday in Kailua-Kona were about 18 mph.”

The rain never fell hard. All the while, Hurricane Lane was about 150 miles to the west of us. The Pillars of Pele, at least this time, protected Kona.  And our Kona palm trees never swayed

Here is how Hurricane Lane Looked on 8/24/18. Notice the winds going around the Big Island. 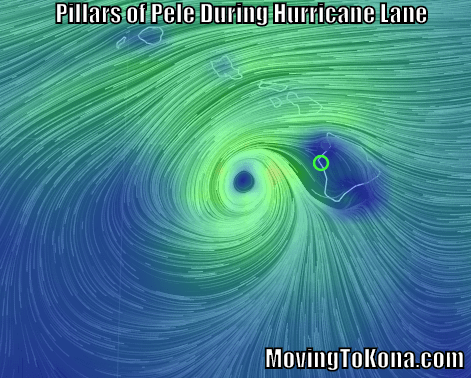 Here are weather radar screenshots of how the Pillars of Pele were protecting Kona from wind and rain. 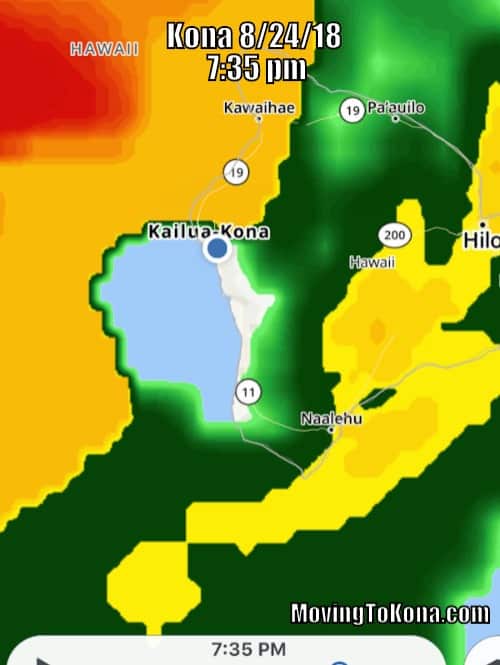 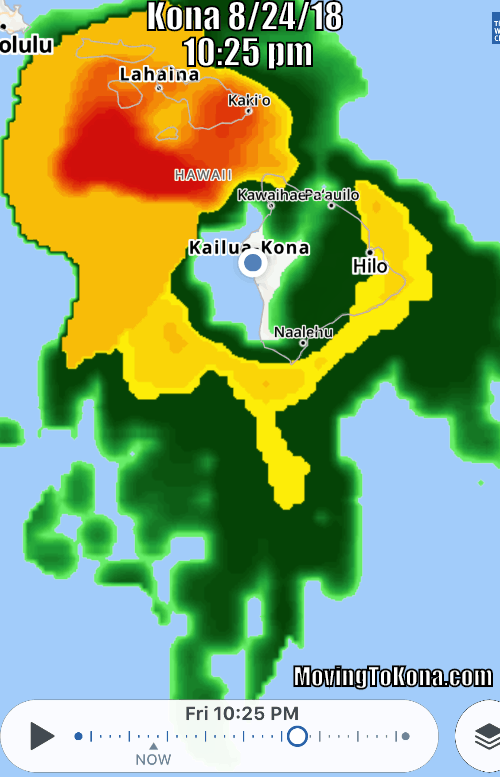 And for a larger perspective of all the Hawaiian Islands: 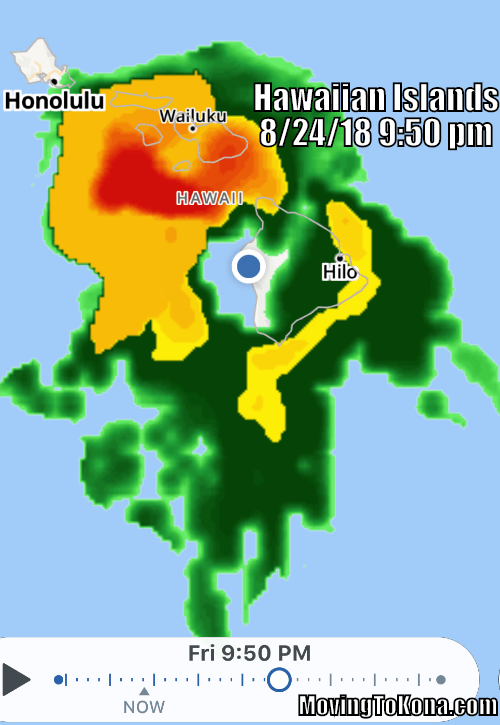 The below image is from KHON2 on September 11, 2018 showing rain forecasts from Tropical Storm Olivia. 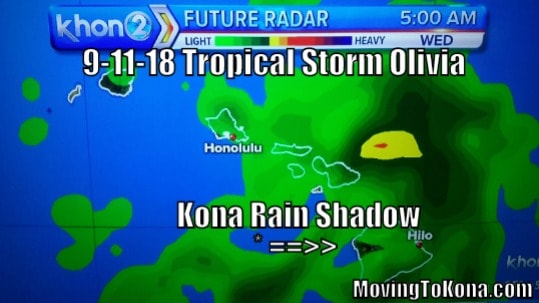 West Hawaii Today’s headline, “Wave riders take advantage of rare opportunity in West Hawaii waters.  The draw was a seldom-seen swell in Kailua Bay, courtesy of Hurricane Lane, which beckoned bodyboarders and surfers alike with the rare opportunity to ride some of the island’s most iconic waters. ‘It’s been almost 20 years probably since it’s broken like this inside the bay,’ said Willy Petrovic, who was hoping the swell would double or even triple in size come Thursday afternoon. ‘I haven’t seen one like this since I was a kid.'” 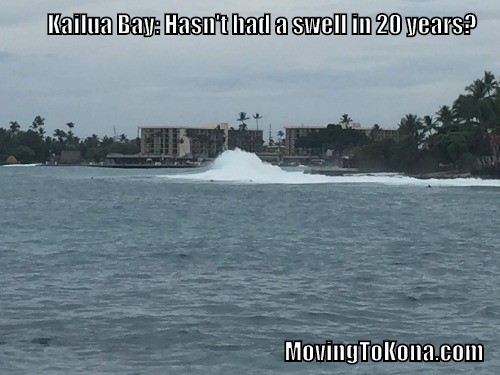 So, now I am in the process of taking all the lanai furniture, potted plants and my ego and putting everything back in its’ place.

Cliff Mass (Professor, Atmospheric Sciences at the University of Washington) has an explanation of why hurricanes are so rare in Hawaii.

August 2018 – East vs West: Just why did Hilo and the eastern portion of the Big Island receive so much devastating rain during Hurricane Lane, while Kona had less than an inch and no winds?

Direct hit tropical storms can produce substantial rainfalls. The below image is from September 2018 and Tropical Storm Olivia. The eastern side of the Big Island may 5-8″ while the western side (Kona) forecasts 1-2″. 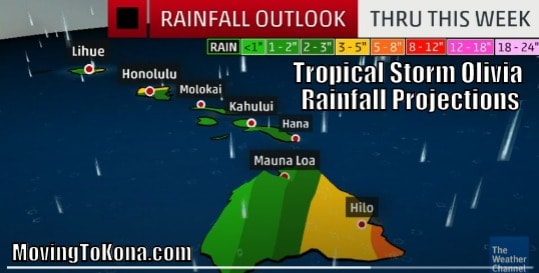 Big Island Now reports, “Hilo Sets Rainfall Record for August.”  They state, “Hilo has picked more than 25 inches of rain since early Wednesday morning, The Weather Channel reported. ‘This has resulted in more than 31 inches of rainfall for the month, setting a new record for the wettest August.'”

We saw that Hurricane Lane was approaching the Hawaiian Islands complete with a Category 5 classification. 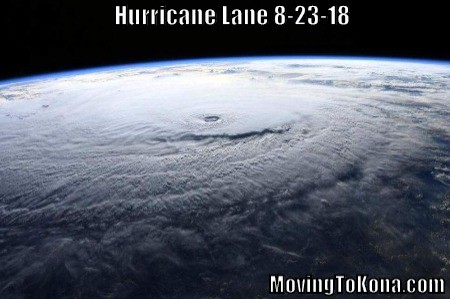 Even though hurricanes rarely, rarely, rarely hit Hawaii I immediately went into my ‘hurricane disaster preparation‘ mode (as my wife watched helplessly). I wanted to build a one-mile-high, impenetrable dome (think ‘Cone of Silence’ or the movie ‘Bio-Dome’) over our home, then purchase 100 sheets of plywood and quadruple board every window, door, garage, dryer vent and everything else I could think of (no, no, no… I left all the entry points into our home open for our lanai geckos: ‘Dances With Cats,’ ‘Major Tom,’ and ‘Moonwalker’). 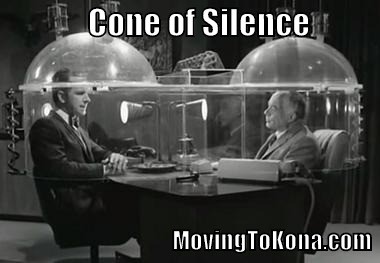 I spent a couple of hours ‘weatherproofing’ our home: moving lanai furniture and potted plants into the garage and then taking photos of everything inside and outside our home and uploading this ‘insurance photographic evidence‘ to the cloud.

It turned out, at least for this hurricane, that I didn’t have to. The reason why? It was Pele!

Footnote: I lived in the rain shadow of the Olympic Mountains for a while (Washington… as you can guess, that is why we left Washington and moved to Kona). We had about 16″ of rain a year while, just 45 miles away, Seattle had about 40″ of rain per year.  If you look at Forks, WA on the central east coast, your will see 119 inches of rain per year. We moved essentially from one rain shadow to another… (But the sun factor was different.) 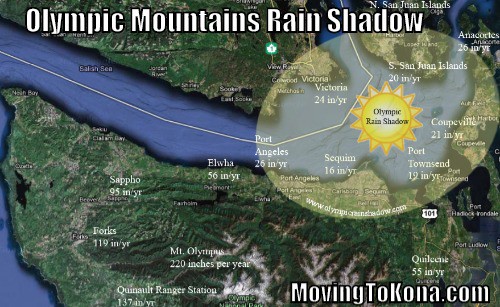