Hawaiian Culture No Comments
Mahalo For Sharing Your Aloha

Here is How You Can Learn The Hawaiian Language For Free. The developers of a free Hawaiian language course want to hear Hawaiian used more frequently by visitors and residents alike, so they are offering a free course.

Sign up for the free Hawaiian for English speakers: (over 12,000 enrolled already) to take Hawaiian on Duolingo. Now coming 10/8/18. 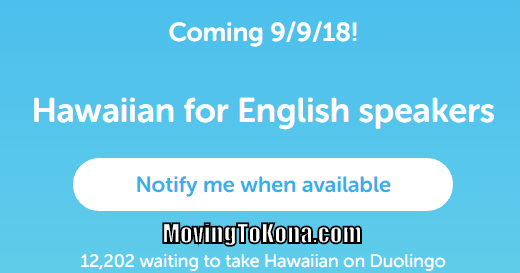 Harder Than Klingon? When I told my neighbor that my wife has signed up for this course, he replied, “Sounds harder than learning to speak Klingon.”  I said, “Really?” Then he grabbed his smartphone and told me to look at the name of the official state fish of Hawaii. The Humuhumunukunukuapua`a. 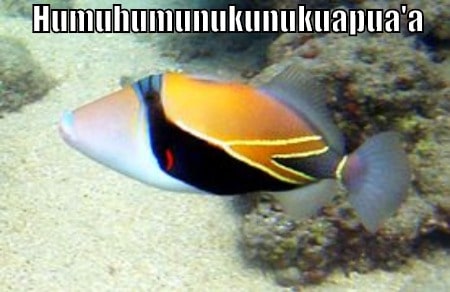 Maybe he was right… There are 26 letters in the Klingon alphabet and the Hawaiian alphabet has just 13 letters: five vowels (each with a long pronunciation and a short one) and eight consonants. That means many Hawaiian words are longer:

How Many Hawaiians Speak Hawaiian? Hawaiian is (just) the fifth most spoken language in Hawaii, with around 18,610 speakers, according to the Detailed Languages Spoken At Home report authored by The State Of Hawaii.

There were 326,893 people comprising 25.4% of Hawaii’s population who spoke a language other
than English at home. At least 130 languages were spoken in this state. Tagalog with 58,345
speakers, Ilocano with 54,005 speakers and Japanese with 45,633 speakers were the top languages. In
the State of Hawaii, 48.8% of those who spoke another language at home spoke the English language
less than “very well”.

What Is Duolingo? Duolingo is an online site with more than 300 million users, it is the largest and most popular program to offer the language to date. And unlike some of the other existing language apps, Duolingo’s content is free. Click the image below to enroll. 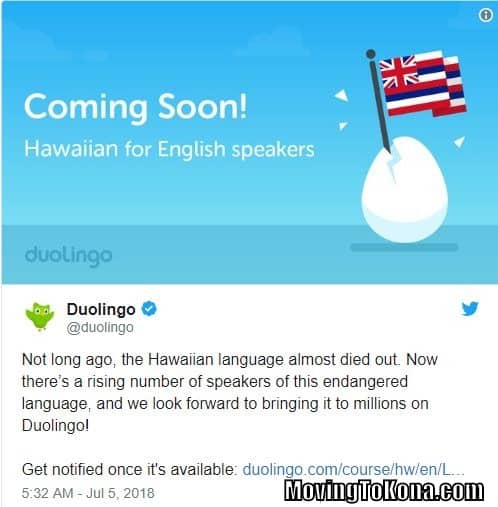 “Not long ago, the Hawaiian language almost died out. Now there’s a rising number of speakers of this endangered language, and we look forward to bringing it to millions on Duolingo,” reads the tweet, which also included a link to sign up for notifications when the course becomes available.

Who Is Behind The Hawaiian Language Program? A network of Hawaiian-focused schools is hoping to significantly expand the number of Hawaiian speakers in the state by making language lessons available on Duolingo, a popular free education app.

When Does The Hawaiian Language Program Start? The Duolingo course will begin in October 2018.

Hawaiian Word of the Day – Pele

Hawaiian Is Easy? The written Hawaiian language is based on English letters. There are 8 consonants and five vowels – much simpler than English!

Click here for a link to all the Hawaiian Words of the Day from  Hawaii New Now.

Hawaiian Words of the Day: Kai and Ka`i

Pidgin is not Hawaiian