Beach, Big Island No Comments
Mahalo For Sharing Your Aloha 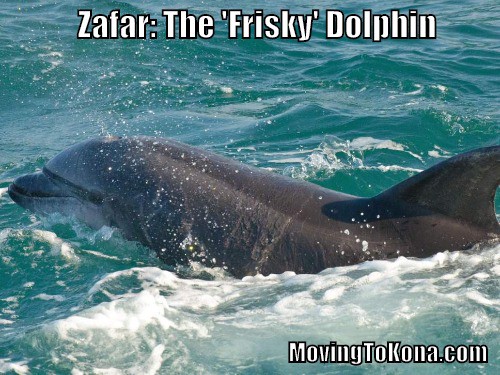 “Several swimmers were frightened. Zafar (the dolphin) even lifted up a
woman swimmer last Thursday with his nose.”

CNN reports “The pretty coastal village of Landévennec in Finistère, in France’s northwestern Brittany region, has been terrorized by a sexually aroused dolphin getting too close to swimmers.
The dolphins’ antics got so bad that the local mayor, Roger Lars, banned bathing on the Brittany beach, issuing a new bylaw. Now local swimmers are prevented from getting closer than 40 meters to the dolphin.

The aquatic mammal was apparently once known for its gentle behavior — he’s something of a local celebrity on the Brittany coast and affectionately nicknamed Zafar. But now that he’s searching for a mate, the dolphin has become increasingly aggressive. Local officials stepped in amid fears swimmers were in danger.

The Independent newspaper reports, “Swimmers warned to avoid ‘randy’ dolphin who likes rubbing himself against them. ‘Several bathers were really afraid,’ says the mayor of Landevennec in Brittany.

“Several swimmers were frightened. He (Zafar) even lifted up a woman swimmer last Thursday with his nose,” he told Ouest-France newspaper.

Local media have been awash with tales of the dolphin’s less savory antics, with several going into some detail about aghast tourists being confronted with the animal’s sexual arousal.

“If you were to apply these rules across the board, whenever a pedestrian approaches a dog, even if it is on a leash, all the mayors in… France should issue bylaws banning pedestrians in town,” he said.

The Guardian reports, “A mayor on France’s Brittany coast took the rare step of banning swimming for several days after a solitary frisky dolphin tried to get too close to bathers.

Roger Lars decided last week that it was safest to ban swimming and diving on the coast near Landévennec, where the over-friendly dolphin had been spotted.

He banned anyone from getting closer than 50 meters to the rutting three-meter dolphin, whom locals nicknamed Zafar.

The dolphin was not aggressive, but he had taken to trying to rub up against swimmers and boats, the local paper Le Télégramme reported.

In Dolphin News From Hawaii:  Three recreational swimmers — two residents and one visitor — have been fined for harassing Hawaiian spinner dolphins off Makua Beach.

NOAA said law enforcement officers spotted the swimmers pursuing a pod of dolphins and recorded their activities for about 15 minutes.

“They saw not only that the swimmers were clearly pursuing the animals, but also that the pursuit was causing marked behavioral changes in the dolphins, including tail slaps and quick changes in direction,” NOAA said, in an online post.

The Marine Mammal Protection Act bans any attempt to harass, hunt or kill protected animals, which include Hawaiian spinner dolphins.

Dolphin Mating Habits: So, how do dolphins get to reproduction? Male dolphins try to woo females in a variety of ways. A male may sing to his love interest, bring her gifts, and even perform acrobatic maneuvers to win her attention. If there are multiple suitors, males will even fight with each other to see who gets to mate with the female.

Unfortunately for the females, sometimes males form gangs that kidnap females from other pods. One or more of the males in the gang will try to mate with the female, and if she refuses, she is often attacked. On occasion, female groups are able to chase the males away.

When dolphins do mate, each mating only takes about ten seconds, but it can be repeated several times over the next few days – or even within an hour! Dolphins mate belly to belly and, after the mating, the male leaves to find a new mate. Females are left to raise the calf without the male.

Now, everybody, sing along

They call him Flipper, Flipper, faster than lightning,
No-one you see, is smarter than he,
And we know Flipper, lives in a world full of wonder,
Flying there-under, under the sea!

Everyone loves the king of the sea,
Ever so kind and gentle is he,
Tricks he will do when children appear,
And how they laugh when he’s near!

They call him Flipper, Flipper, faster than lightning,
No-one you see, is smarter than he,
And we know Flipper, lives in a world full of wonder,
Flying there-under, under the sea!