How Do Locals Tell Weather In Kona?

Kona, Weather No Comments
Mahalo For Sharing Your Aloha

What Is The Annual Temperature & Rainfall Amounts For Kona, Hawaii?

Other than a tropical storm passing through the Hawaiian Islands, it is pretty easy to predict what the weather will be in Kona for tomorrow.

How The Locals Tell The Weather In Kona: This ‘locals’ method has been used, and proven, for hundreds and hundreds of years. 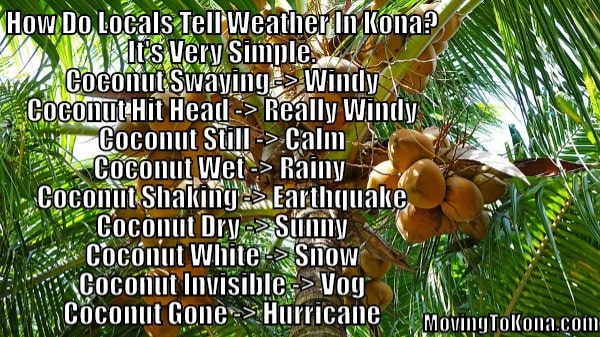 Average Weather Temperature & Rainfall For Kona, Hawaii By Month: Other than a tropical storm passing through the Hawaiian Islands, it is pretty easy to predict the weather for any day of the year… About 84 degrees during the day and around 70 degrees at night. Also, you can expect about an inch of rain per month. Who needs weathermen? 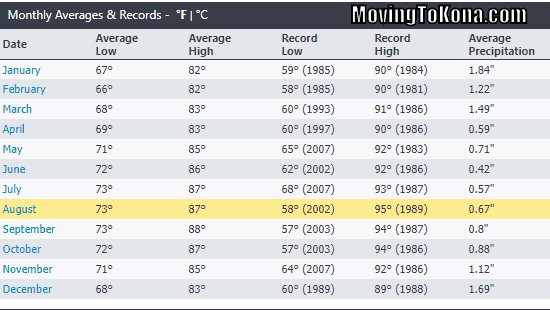 Historical Record High And Low Weather Temperatures For Kona, Hawai’i: When the temperatures at night drop below 66 degrees, not just the sweaters come out, but the jackets come out.   And that 57-degree day, well, to locals, it felt like this. 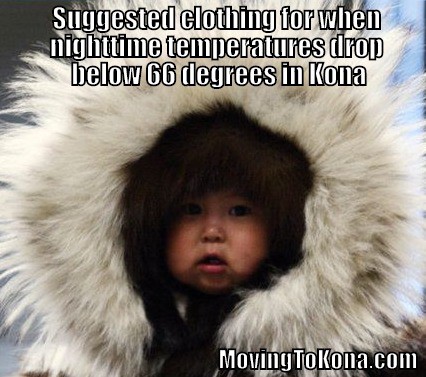 Aloha Tip: When you move to Hawaii, don’t throw away those Ugg Boots, your down vest or all your pairs of long pants. After you adjust to the Hawaiian climate and weather, there may be a night or two when you really will be digging through your closet for something warm. Same goes for blankets.

Geological Factors Impacting Kona Weather: The majority of weather (rain, wind) approaches Kona from the east. The Mauna Kea, Mauna Loa Volcano, Hualalai Volcano and Kilauea Volcano all act as a barrier to any advancing storms.

The Kona Banana Belt: Essentially Kailua-Kona sits in a ‘banana belt.‘ The Kona banana belts form on the lee (not windy) side of the volcanoes because when air from the ‘wet side’ rises over the top of volcanoes, it cools and releases moisture on the windward slope. This causes the west-facing slopes of Hualalai and Mauna Loa to be sheltered from the trade winds and rain.

That is why Hilo gets 120++” of rain per year. As the air is pulled down the Konar side, it is compressed and heated so it warms and dries out Kona because it is now in a rain shadow.

The Weather Pattern Makes The Slopes Perfect For Kona Coffee: As air flows around these large volcanoes, the air curves back on the leeward side and flows up these slopes, producing a belt of persistent clouds and rain at higher elevations.  This zone is home to the farms that produce world-famous Kona coffee. Uplift is enhanced in the afternoons when the sun warms these slopes. Strong trade winds and intense heating during the summer also increase lifting, clouds, and rainfall on the Kona slopes. The volcanic soil plays a major factor in the quality of Kona coffee as well.

Did You Know? As mentioned above Kona lies on the leeward (dry) side of the Big Island and has very little precipitation. Kona is the only region in the islands where summer rainfall exceeds winter rainfall. The wettest month is September but this is no reason to avoid Kona this month.

What is Hawaiian Time (Island Time)?

How To Tell A Mainlander In Hawaii