Before you find employment in Hawaii, you need to know the costs associated with living in Hawaii.

(Not Surprisingly) Island Living Is Expensive:  Anytime you live on an island, whether Hawaii, Puerto Rico, the San Juan Islands and even, to a certain extent, Australia, it is expensive. Before you move to Hawaii you need to know the Rule of 3’s.

Also, Local Businesses Are Reluctant To Hire Mainlanders: More on that in a moment.

Aloha Request: Share this with a friend who is thinking of moving to Hawaii.

Another Island: Quite a few years ago we were visiting one of our favorite islands – the San Juan Islands in Washington state. The islands are hard to get to (just like Hawaii) because you have to fly into Seattle, drive (scenic) about three hours so you can use a ferry for the short ride to one of the ‘San Juans.’ 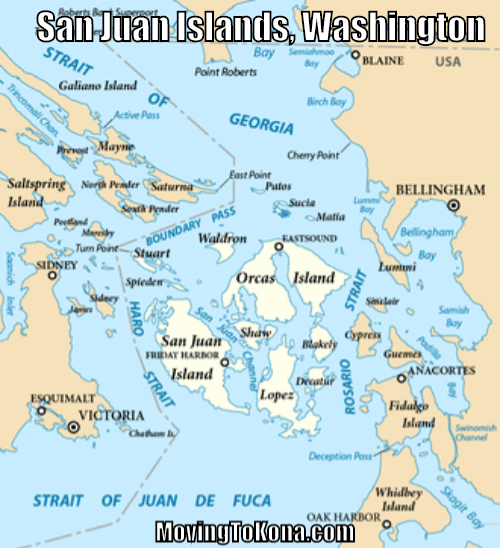 First, A Lesson I Learned About ‘Island Living’

Aloha Tip: Make a ferry reservation if you visit the San Juan Islands. 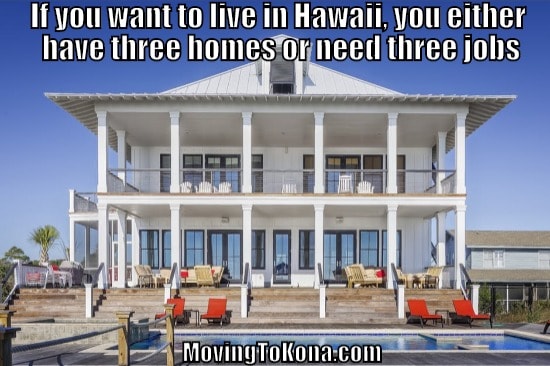 The Exception To The Rule of 3’s: Like all rules, there are exceptions. In this case, the exception is – bring your own money. If you have worked hard, saved, planned and have accumulated enough funds, you can just bring your money to Hawaii.

Retirees Know Exception To The Rule of 3’s: Retirees are choosing the Big Island to live and they are bringing their money with them. In fact, Hawaii is now ranked as the best state for retirement, according to Forbes. In addition, more seniors in Hawaii live past the age of 65 compared to anywhere else in the United States.

Approximately 17 percent of Hawaii residents are 65 and older, a figure that underscores the graying of the state’s population, US Census Bureau estimates show. The figures show that Hawaii saw a 25 percent increase in the number of residents 65 and older from 2010 to 2016. 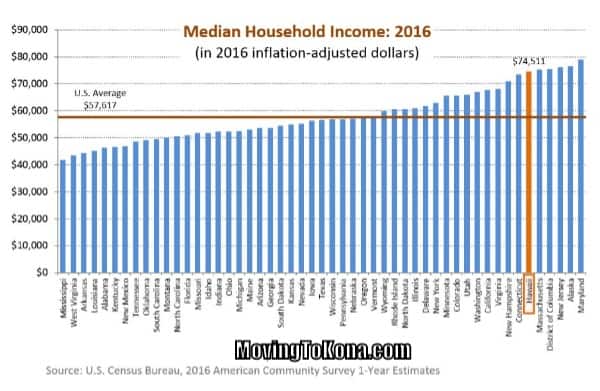 Service Industry Jobs In Hawaii Are Plentiful. Due to the high number of visitors, tourism-related jobs are in demand. Maui Now reports, “A new study from culinary site Chef’s Pencil recently released a study on employment and wage trends for U.S. chefs and head cooks.   Hawai‘i topped the list as far as pay, followed by New Jersey and District of Columbia. The national average stands at $49,650; however, chefs in Hawai‘i are paid an average of $70,480, almost twice as much as their counterparts in Kansas ($36,470); South Carolina ($37,110) and Idaho ($38,120), the three lowest-ranking states for chef pay.”

Which Service Industry Jobs Are ‘Always’ In Demand? Hawai’i’s warm climate makes two service industry jobs in high demand year-round: pool service and landscaping services.  If you are seeking to start a service business, these two are a good place to start.

Where Are The Jobs In Hawaii? KHNL reports, “Economists are seeing troubling trends in Hawaii’s economy.” The University of Hawaii Economic Research Organization division issued a report, titled “Hawaii’s Growth: Down, but Not Out.” The academic researchers point out that almost all of the growth in the economy remains in tourism. That means Hawaii is even more dependent on the fate of the mainland economy. 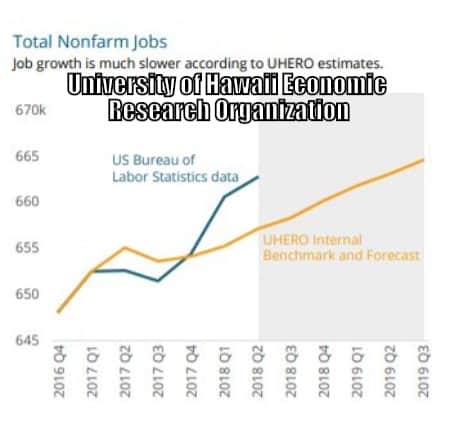 The job growth in Hawaii has either stopped or reversed in most sectors, including construction, military, and government employment, while tourism grows despite a slight impact from the Big Island eruption and devastating storms there and on Kauai from 2018 storms. 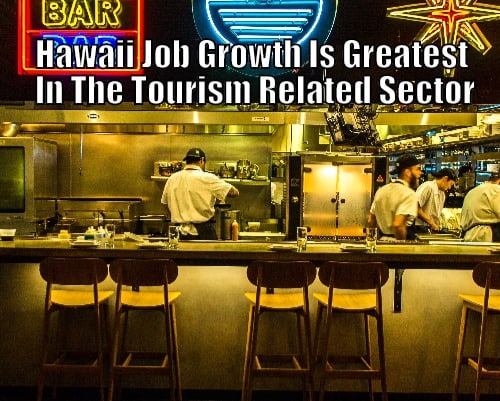 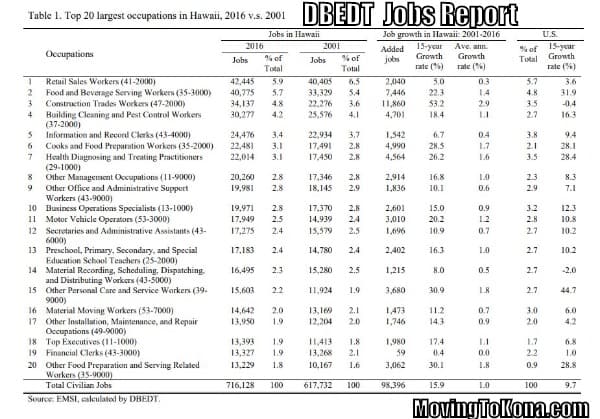 In terms of the number of jobs, Retail Sale Workers ranked the largest occupation in Hawaii with 42,445 workers in 2016; followed by Food and Beverage Serving Workers at 40,775; and Construction Trade Workers at 34,137.

By the number of workers, Construction Trade Workers increased the most by 11,860, between 2001 and 2016; followed by Food and Beverage Serving Workers with an additional 7,446; and Cooks and Food Preparation Workers at 4,990 additional.

The highest paying occupation in Hawaii in 2017 was Health Diagnosing and Treating Practitioners with median hourly earnings of $46.11; followed by Top Executives at $45.31; and Lawyers, Judges, and Related Workers at $42.06.

When looking at the growth rates, Nursing, Psychiatric, and Home Health Aides grew the most at 71.4 percent between 2001 and 2016. This reflects the growth of our elderly population and the increase in demand for home healthcare.

In short, there is growth in accommodations and food service jobs and not a lot of growth in most of the rest of the economy.

What Is The Hawaii Unemployment Rate? It is good news. The annual average unemployment rate in Hawaii was 3.0% in 2016, 1.9% points lower than the U.S. average. Hawaii ranked 3rd among the 50 states and the District of Columbia where the lowest had the rank of 1. 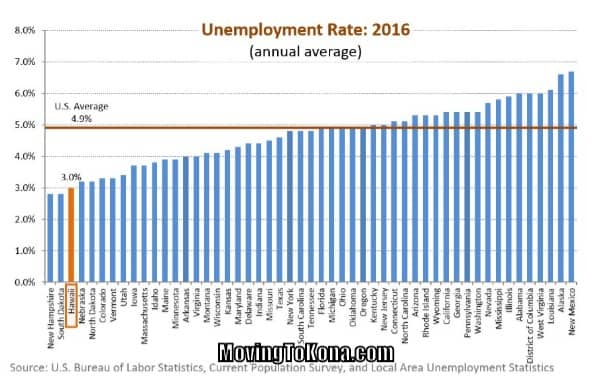 Getting A Job In Hawaii – Local Businesses Are Reluctant To Hire Mainlanders: If you are searching for a job in Hawaii, be prepared for a blatant bias against hiring new residents moving to the Hawaiian Islands. Many employers just won’t hire someone ‘fresh off the boat (or airplane)’ because they have found people who are enamored with living in Hawaii and then,  after arrival, the newcomers discover the realities of rent, food, distance to ‘back home,’ and low wages. Quite a few mainlanders move back.

One of our ‘new neighbors’ is a physician from the midwest. He signed a one-year contract to work with a medical group and bought a home. After a few months, we were talking about how he likes his new job and Kona. He said that he is considering moving back to the mainland.

Aloha Tip: If you sign a rental agreement, try for a six-month term – just in case.  And… rents are expensive. 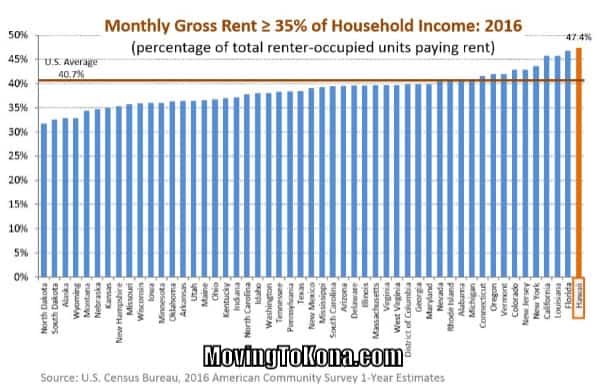 What Kind Of Jobs Are Available In Kona? The Big Island has a cost of living 40% higher than the rest of the nation. There are few jobs readily available that provide a livable income. Many jobs revolve around tourism with agriculture following.

You can search Hawaii.gov for jobs in Hawaii government. 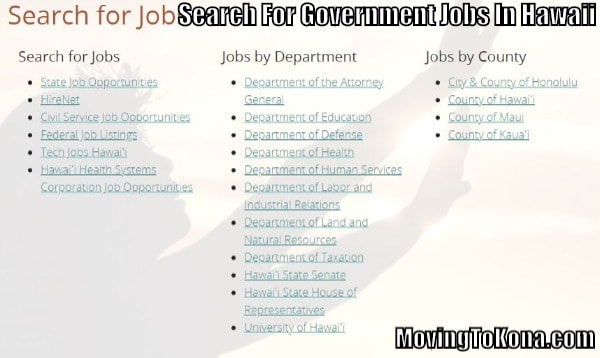 OK, now, finally, for a bit of good news…

Hawaii Household Income Increased: Household and family incomes in Hawaii increased last year to remain among the highest in the country, according to a U.S. Census Bureau survey.

The median household income for Hawaii increased by 2.4 percent to $77,765 last year, the fourth highest among states, according to the survey. Median family income increased by 3 percent to $91,460, the sixth highest in the U.S.

Nearly 40 percent of Hawaii families had two earners, and nearly 17 percent had three or more, according to the survey. Oahu had the most families with three or more earners at nearly 18 percent. 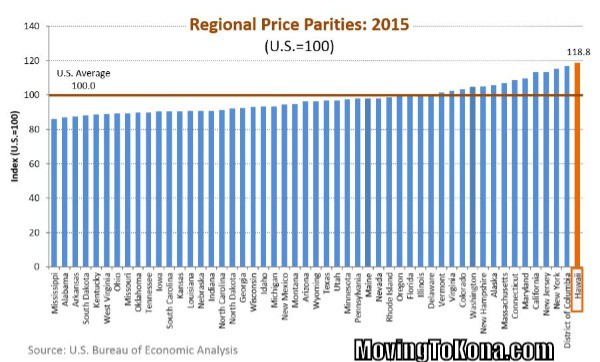