Hawaii, Real Estate No Comments
Mahalo For Sharing Your Aloha

The Cost of Utilities: Which State Pays the Most? An analysis (possibly a bit flawed) by Move.org concludes something you already know… It is expensive to live in paradise.

Factors Contributing To Flawed Conclusion: Move.org concludes that it cost about $730 per month for your electricity, natural gas, internet costs, cable and water expenses. That amount is probably exaggerated considering how little natural gas Hawaiians use coupled with the fact that many households simply don’t use air conditioning.

The best things in life are free. The rest are too expensive. 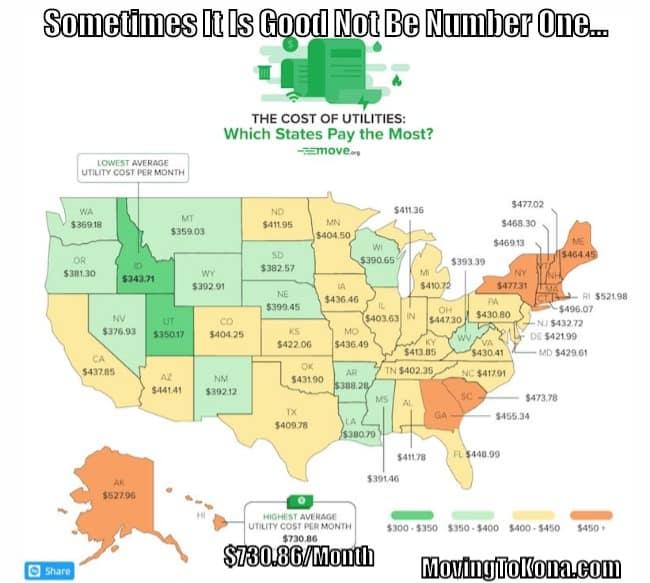 Utility Cost Calculations:  While their methodology using national average consumption rates isn’t perfect (To calculate electricity and natural gas costs, they multiplied average national consumption rates by the average cost for these services in each state—individual bills may vary depending on actual usage), their conclusion about Hawaii having the highest utility costs are true. The study factored in the following items: Electricity, natural gas, internet costs, cable and water expenses.

While the Move.org study estimated the average electricity bill to be $300/month, below: 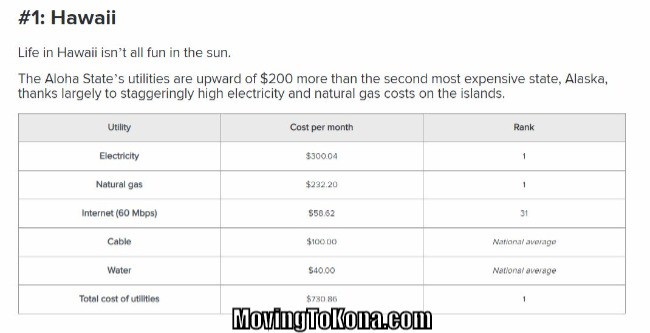 The State of Hawaii offers a different conclusion, below:

Internet Costs: The study estimated average monthly internet costs of about $56. With regards to your internet costs, if you look at this chart and recognize how far away we are from ‘land,’ you might conclude that our fees are too low. 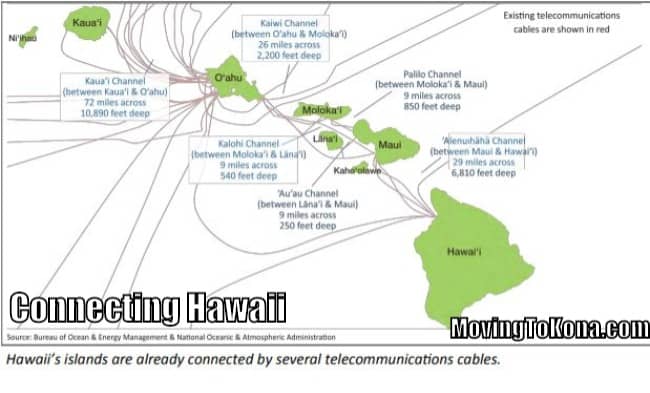 Natural Gas Consumption In Hawaii: With its limited supply and distribution network, Hawaii has the lowest total natural gas consumption in the nation (according to U.S. EIA, State Energy Consumption Estimates 1960 Through 2015) and the lowest per capita consumption.  The Hawaiian commercial sector, which includes hotels and restaurants, consumes almost two-thirds of all the natural gas distributed in Hawaii. The residential and industrial sectors account for almost equal shares of the rest. Only slightly more than one-third of Hawaiians heat their homes, and very few of those rely on natural gas as their primary fuel for home heating.

Here is a bit of ‘Paradise’ music to soften the blow.