You can listen to the Science Friday podcast about the Big Island here or via iTunes. 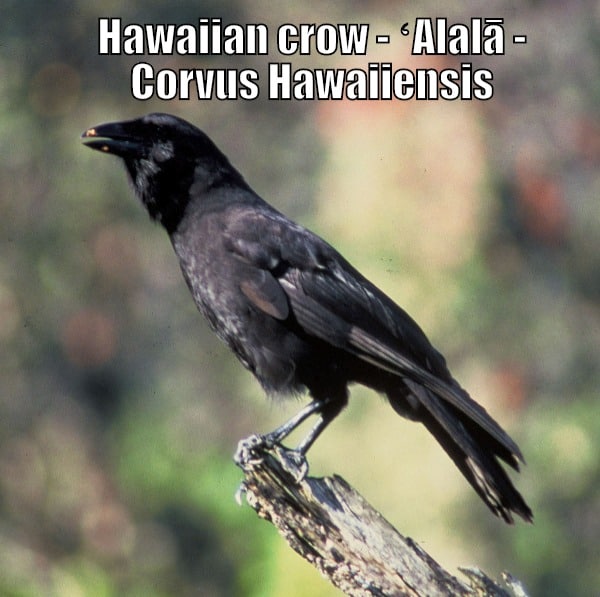 Hawaiian Crow (Alala): Before the Hawaiian crow became extinct in the wild, the species was found only in the western and southeastern parts of Hawaii. It inhabited dry and mesic forests on the slopes of Mauna Loa and Hualālai at elevations of 3,000 to 6,000 feet.  Ōhiʻa lehua (Metrosideros polymorpha) and koa (Acacia koa) were important tree species in its wild habitat.

The Science Friday podcasts talk about efforts to save the remaining crows in captivity.

About five million years ago, the island of Kauai emerged from the ocean waves, and a new chain of island habitats was born, right in the middle of the Pacific. In those Hawaiian islands, birds would have found a multitude of microclimates, a lack of most predators, and a pretty safe spot to grow and evolve—which they did, diversifying into a wide range of species, each suited to a different lifestyle and habitat. But today Hawaii’s diverse birds are under attack by invasive mongooses, cats, rats, and other predators. Some birds no longer breed in the wild and need the help of humans to reproduce and survive. Alison Greggor, a post-doctoral research associate at the San Diego Zoo’s Institute for Conservation Research, joins Ira to talk about efforts to rehabilitate the nearly extinct Hawaiian crow, the ʻAlalā, and the race to save delicate bird eggs before predators get them first. When people talk about evolution and islands, it seems like the Galapagos get all the credit. But just like that island chain, with Darwin’s famous finches, the Hawaiian archipelago is itself a stunning natural lab for adaptation and evolution. As new land is created and as old islands erode, the Hawaiian islands have developed a fantastic array of microclimates and habitats—and unusual species have evolved to take advantage of each one. 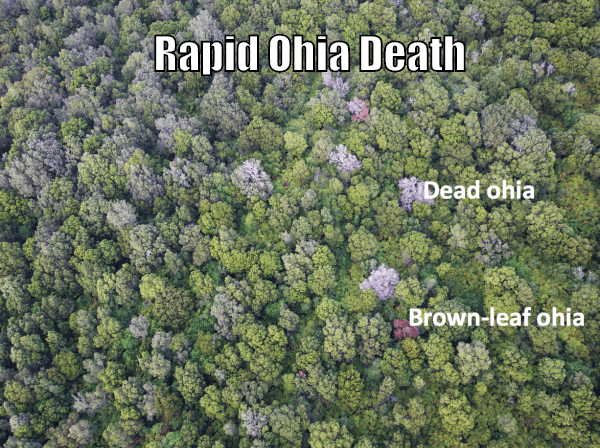 What is ROD: Rapid ʻŌhiʻa Death (ROD) is newly identified fungal disease currently attacking and killing ʻōhiʻa on Hawaiʻi Island. This fungus clogs the tree’s vascular system, depriving the canopy of water, and may kill ʻōhiʻa very quickly. ʻŌhiʻa is the keystone species in Hawaiian forests, and ROD has the potential to cause major ecosystem disturbances that will negatively impact watersheds, cultural traditions, natural resources, and quality of life.

Infected ‘ōhi‘a trees may have individual branches or entire canopies of recently dead and still attached brown leaves. The tree’s sapwood may have dark and unusual staining and a fruity odor, though signs of the fungus may not be visible on the outside of the tree. Additional testing is needed to confirm ROD, since ‘ōhi‘a may also die from other diseases, drought, and injury. 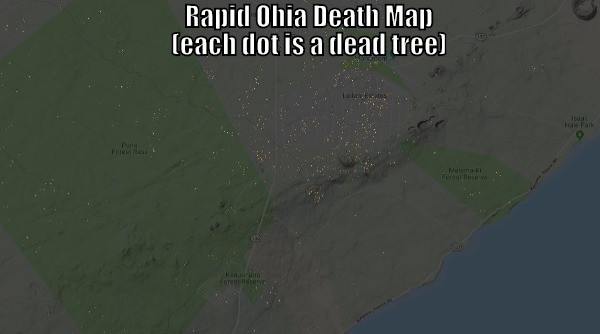 Carnegie Mellon Airborne Observatory: The CAO flies planes over Big Island forests and uses ‘gas analysis’ to determine if a tree is dying or not. The team is mapping the condition of forests on the Big Island of Hawaii, with a particular focus on detection of native Metrosideros polymorpha trees suspected of contracting Rapid Ohia Death or ROD. The symptomatology of ROD, which is caused by the highly aggressive Ceratocystis fimbriata fungus, includes rapid browning of the foliage in Ohi’a canopies, followed by defoliation and a graying of the residual canopy branches in the standing dead tree.

You can learn more about Rapid ‘Ohi’a Death from The University of Hawaii, College of Tropical Agriculture.

And the third part of the podcast…

Mauna Loa ‘Mars Colony’:  Perched on the side of the Mauna Loa volcano on Hawaii’s Big Island is an otherworldly experiment—a Mars colony where half a dozen crew members spend eight months living together and simulating life on the Red Planet. The location looks altogether unearthly, with rusty red rock fields that look a lot like the images being sent back from the surface of Mars. What happens when you jam six people in a 1,200 ft2 habitat for months at a time? Kim Binstead, the principal investigator on the HI-SEAS project and a professor of information and computer sciences at the University of Hawaii at Manoa, joins Ira to give a glimpse of what life is like inside.