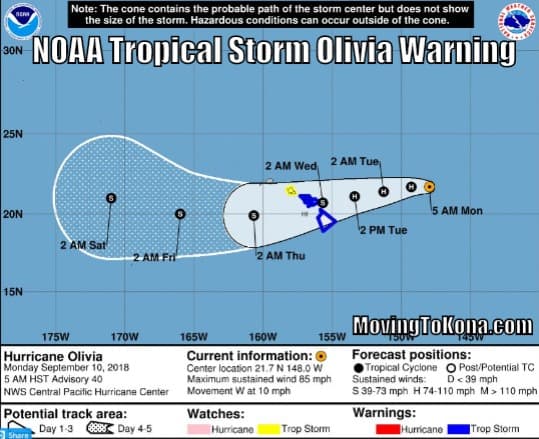 Hurricane Olivia is expected to bring strong winds, heavy rainfall, and high surf to parts of the state. Olivia will continue moving toward the west early today, followed by an expected turn toward the
west-southwest tonight. Based on the latest forecast track, Olivia will approach the main Hawaiian Islands on Tuesday and will likely move over portions of the island chain Tuesday night and Wednesday.
While remains too early to determine which island is at the greatest risk, Maui and the Big Island will be the first areas to experience impacts from Olivia. Do not focus on the exact forecast track or intensity of Olivia and be prepared for changes in future forecasts. Damaging tropical storm force winds may begin as early as Tuesday afternoon across Maui and the Big Island. hurricane force wind gusts are possible as Olivia moves across the state Tuesday night and Wednesday. It is important to remember that the mountainous terrain of Hawaii can produce localized areas of highly enhanced winds, even well
away from the tropical cyclone center.

The chance for flooding rainfall will increase rapidly late Tuesday and will remain a significant threat through at least Wednesday. Preliminary storm total rainfall amounts are in the 10 to 15-inch
range, with isolated areas up to 20 inches. Much of this rainfall will be focused on windward areas, many of which already received substantial amounts of rain from recent Hurricane Lane. However, flooding will be a significant threat to all areas.

Large swells and surf generated by Hurricane Olivia will be the initial threat. Surf will slowly build over the next couple of days, and may become damaging on some east facing shores Tuesday and Wednesday. This is expected to result in significant beach erosion and overwash onto vulnerable coastal roadways, particularly during high tide.

These services all project the (most likely) path directly over the Big Island. 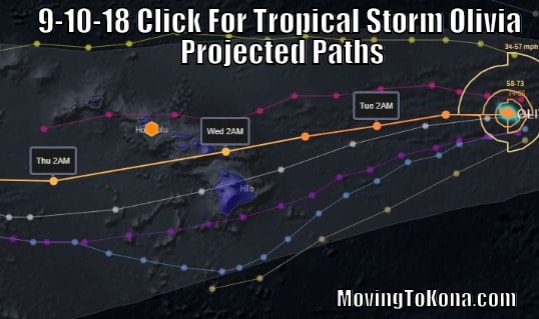 * WIND:
Protect against dangerous wind having possible significant impacts
across Maui County and the Big Island. Potential impacts in this area
include:

– Several large trees snapped or uprooted, but with greater
numbers in places where trees are shallow rooted. Several
fences and roadway signs blown over.

– Some roads impassable from large debris, and more within urban
or heavily wooded places. A few bridges, causeways, and access
routes impassable.

– Scattered power and communications outages, but more prevalent
in areas with above ground lines.
Also, protect against hazardous wind having possible limited impacts
across the rest of the State of Hawaii.

* SURGE:
Protect against locally hazardous surge having possible limited
impacts across eastern shorelines of the Big Island, Maui County, and
Oahu. Potential impacts in this area include:

– Localized inundation with storm surge flooding mainly along
immediate shorelines and in low-lying spots, or in areas
farther inland near where higher surge waters move ashore.

– Minor to locally moderate damage to marinas, docks, boardwalks,
and piers. A few small craft broken away from moorings.
Elsewhere across the Hawaiian islands, little to no impact is
anticipated.

– Major rainfall flooding may prompt many evacuations and rescues.

– Flood waters can enter many structures within multiple
communities, some structures becoming uninhabitable or washed
away. Many places where flood waters may cover escape routes.
Streets and parking lots become rivers of moving water with
underpasses submerged. Driving conditions become dangerous.
Many road and bridge closures with some weakened or washed out.

* EVACUATIONS:
Listen to local official for recommended preparedness actions,
including possible evacuation. If ordered to evacuate, do so
immediately.

* OTHER PREPAREDNESS INFORMATION:
Now is the time to complete all preparations to protect life and
property in accordance with your emergency plan. Ensure you are in a
safe location before the onset of strong winds or possible flooding.
It is important to remain calm, informed, and focused during an
emergency. Be patient and helpful with those you encounter.
If you are a visitor, be sure to know the name of the city or town in
which you are staying and the name of the county in which it resides.
Listen for these locations in local news updates. Pay attention for
instructions from local authorities.
Rapidly rising flood waters are deadly. If you are in a flood-prone
area, consider moving to higher ground. Never drive through a flooded
roadway. Remember, turn around don`t drown!
If in a place that is vulnerable to high wind, such as near large
trees, a manufactured home, upper floors of a high-rise building, or
on a boat, consider moving to a safer shelter before the onset of
strong winds or flooding.
Closely monitor weather.gov, NOAA Weather radio or local news outlets
for official storm information. Be ready to adapt to possible changes
to the forecast. Ensure you have multiple ways to receive weather
warnings.

– For information on creating an emergency plan see getagameplan.org

The next local statement will be issued by the National Weather
Service in Honolulu HI around 1130 AM HST, or sooner if conditions
warrant.