Hurricane, Kona, Weather No Comments
Mahalo For Sharing Your Aloha

08/27/2018 Here is the final path that Tropical Storm Lane, Hurricane Lane then back to Tropical Storm Lane has traveled. While never a direct impact, still caused substantial rain damage. Seems like it was a lot closer than this Weather Channel report indicates. 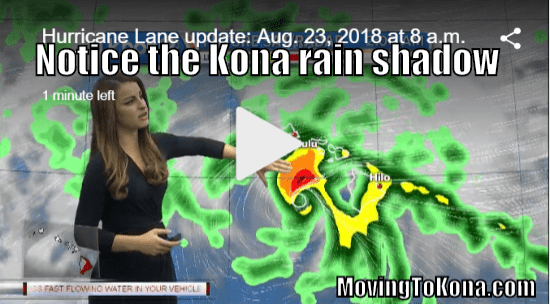 Rain has already begun to fall in areas of Ka‘u and Puna.

“A lot of it is kind of being eaten up by the mountains – Mauna Loa and Maunakea, but some of these showers, of course, are going to spread on over to the Kona area,” Chevalier said late Wednesday morning. “So, as Lane moves west-northwest, you’re going to start to see more and more rain as you go through the day today, and it will be heavy at times.”

Chevalier estimated that it will take more than a day for the storm to pass Hawaii Island. Rain is likely to be the biggest concern though some wind can be expected as the storm moves by to the west of the island.

“This is just the beginning,” he said, “It will take 24-48 hours for this thing to be in a position to the north-northwest, to where the Big Island doesn’t have to worry about it anymore.”

Current forecast models call for 20-30 mph winds with gusts reaching 55 mph for leeward areas of Hawaii Island from North Kona to about Hawaiian Ocean View Estates. The potential remains for winds to reach up to 73 mph. Rainfall accumulations are expected to be around 6 to 10 inches although some points could see higher amounts.

Southern and southeastern areas of the island can expect 20-30 mph winds with gusts reaching 55 mph. The potential remains for winds to reach up to 73 mph. Rainfall could total more than 2 feet in areas of Ka‘u.

08/21/2018 West Hawaii Today reports: Hurricane Lane strengthened to a Category 5 storm Tuesday evening as it continues to make its way toward the Hawaiian Islands.

As of 8 p.m. Tuesday, Lane was a strong Category 5 hurricane circulating 160 mph winds some 370 miles south-southeast of Kailua-Kona, according to forecasters. The storm was headed west-northwest at 9 mph.

“On the forecast track, the center of Lane will move very close to or over the main Hawaiian Islands from Thursday through Saturday,” forecasters said.

Hurricane warnings have been issued for Hawaii County.
Lane is a Category 5 hurricane hundreds of miles southeast of Hawaii.
Lane will curl northwestward later this week toward Hawaii, eventually weakening.
A direct strike on parts of the Hawaiian Islands is possible late this week.
The island chain will see high surf, rip currents, winds and heavy rain, regardless of the exact track.
Whether the core of Lane’s strongest winds affects parts of the islands remains uncertain.

08/20/2018 – Noon HST Weather.com projects Hurricane Lane Path. A northwest turn by Hurricane Lane projects that some areas of Hawaii may be at risk for hurricane or tropical storm winds.

Please share these Hurricane Preparedness Tips with those that may be in the path of Hurricane Lane. 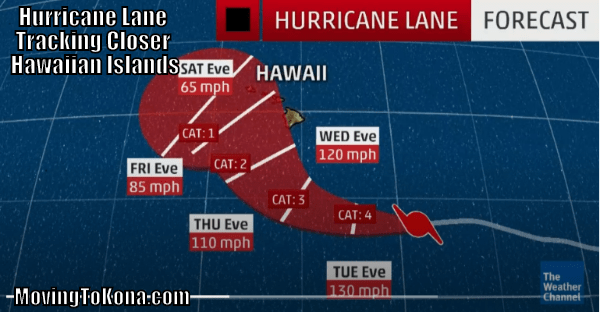 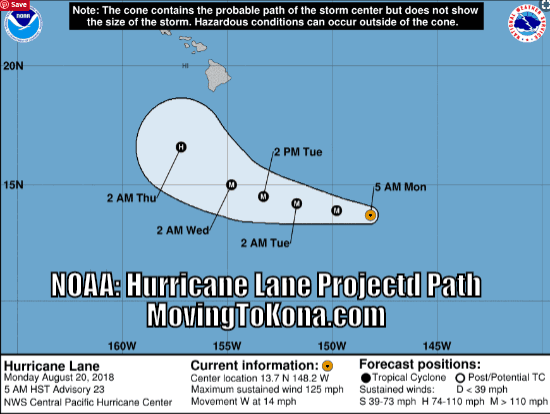 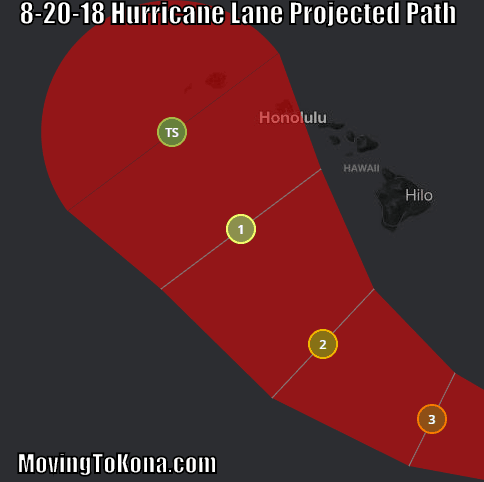 Please share these Hurricane Preparedness Tips with those that may be in the path of Hurricane Lane.

08/19/2018 – 5 p.m. Update – Hurricane Lane (video) may now take a northerly turn northward sooner than expected. It’s still too early to know what types of impacts Hawaii will feel from Lane, but the current forecast path takes it just to the south of the Big Island sometime Wednesday.

Forecasters are urging Hawaii residents to watch Lane more closely and be prepared. 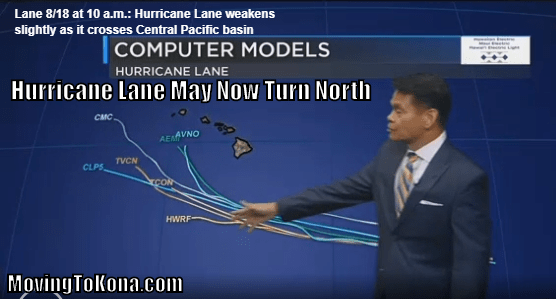 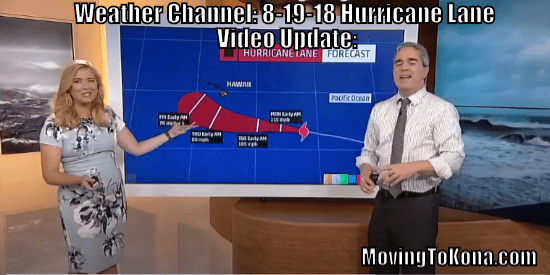 08/19/2018 Hurricane Lane KHON2.com update: Hurricane Lane weakened slightly today with winds down to 130 mph from 140 mph this morning.  Lane is still a very powerful hurricane that is currently over a thousand miles southeast of Hilo.

Gradual weakening is expected and by late Tuesday through Thursday, Lane is expected to pass south of the Hawaiian Islands.

08/18/2018 Hurricane Lane Weather Channel update: It is becoming increasingly likely that Lane will maintain a more westward trajectory like Hector did, and it will pass far enough south of the islands to cause only showers, high surf and rip currents. 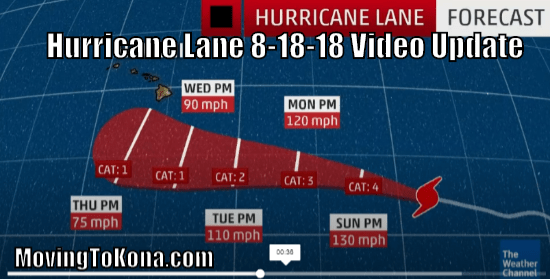 Projected path for Hurricane Lane – Video from the Weather Channel. 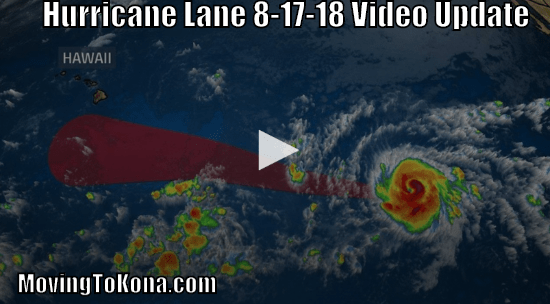 08/16/2018 12:15 HST Tropical Storm Lane / Hurricane Lane Spaghetti Model Updates. According to the Weather Channel (subject to change), this storm system may be passing south of the Big Island. 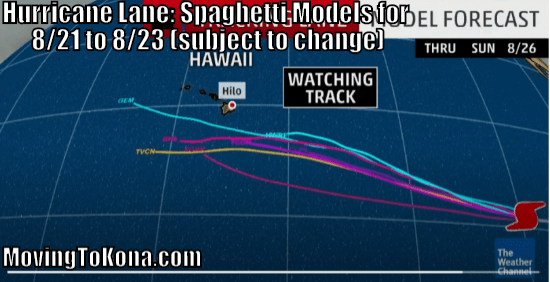 Hawaii News Now Tropical Storm Lane continues to strengthen and is expected to be a major hurricane when it crosses into the Central Pacific this weekend, the National Hurricane Center said.

At about 5 a.m. Thursday, Lane was located about 1,455 miles west-southwest of the southern tip of Baja California, Mexico, or a distant 1,935 miles east-southeast from Hilo.

Lane is expected to strengthen into a hurricane by Friday and could become a major hurricane over the weekend, forecasters say. As it’s still very far away, it’s too early to tell how the storm could affect the Hawaiian Islands. But forecasters are urging Hawaii residents to watch Lane closely as it marches toward the Central Pacific.

The latest forecast track shows Lane about 335 miles southeast of Hilo on Tuesday morning, and several computer models show its track heading south of the islands. 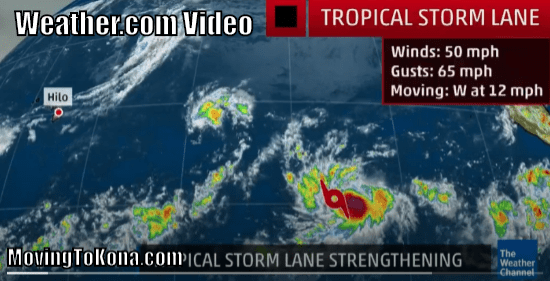 AccuWeather Tropical Storm Lane Update  8/16/2018 7:10:00 a.m. Tropical Storm Lane is about 1400 miles southwest of the southern tip of Baja California. This storm has maximum sustained winds of 50 mph and is moving west at 12 mph. Lane will continue to move over warm water and within an environment of moist air and relatively low vertical wind shear. These conditions will support further intensification and Lane is expected to become a hurricane within the next 12-24 hours. The growing tropical cyclone will remain far removed from land and will not pose any direct impact to land over the next several days. However, Lane may track relatively close to Hawaii by the middle of next week and will produce rough surf and rip currents along the beaches.

Be sure to read Hurricane Preparedness Checklist: Family Planning for Hurricane Safety