I Remember My First ‘Black Witch Moth’ Encounter (we were both surprised): We had just moved to Kona and had spent most of the day fighting boxes. We didn’t have any lamps unpacked yet, so we had a lanai light on. I sat down and saw something flicker across my peripheral vision.  It was dark and large. I remember thinking, “I didn’t know Hawaii has bats?” Well, there is a bat… more on that in a minute. 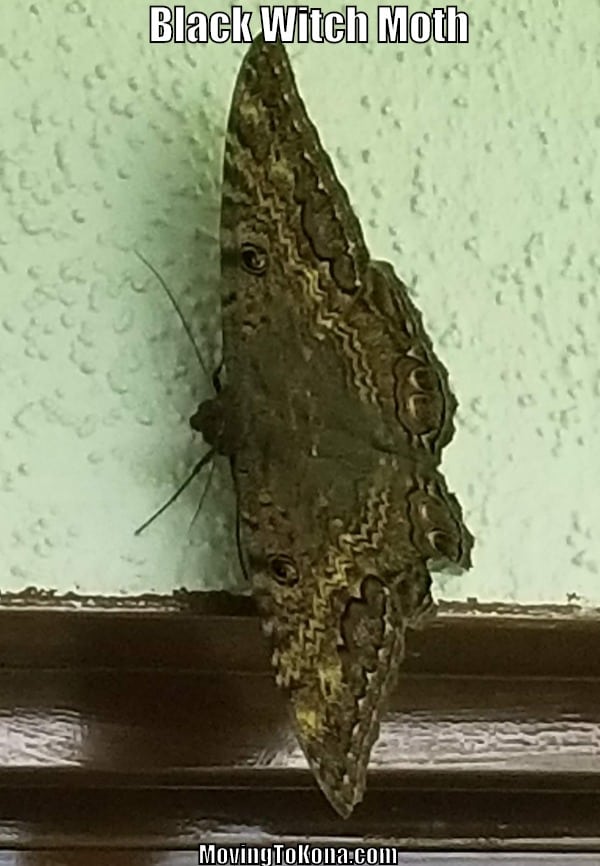 and the image below

Black Witch Moth – Bat Shaped: The erebid moth Ascalapha odorata, commonly known as the black witch moth, is a large bat-shaped, dark-colored nocturnal moth, found from Brazil to the southern United States. It is the largest noctuid found in the continental United States.

Due to their shape and coloration, the Black Witch moth is frequently mistaken for bats as they are large and fly like bats.

Hawaiian Folklore: In Hawaiian culture, the Black Witch Moth is purported to be the embodiment of a loved one saying their goodbyes.

Central American Folklore: In Mexico, they are called the Mariposa de la Muerte (butterfly of death) and were known to the Aztecs. It is said that when a person is sick and this moth enters the house the sick person dies. A variation from southern Texas says that death only occurs if the moth flies in and visits all four corners of the house. In parts of Mexico if one flies over someone’s head the person will lose their hair.

Black Witch Moth – Facts: The Black Witch moth generally flies only at night. During the day you may see one under eaves, a carport or porch awning. They are attracted to soft overripe fruit. They breed year round.

Because of the Black Witch moth similarity to bats, there are many superstitions that have evolved around this moth. Black Witch moths have tympanic organs or ears that detect the echolocation signals generated by bats. This hearing helps them avoid real bats when both are flying at night.

The Black Witch moth does not bite, sting, or carry diseases. It has only a straw-like proboscis or tongue to drink flower nectar through. It is perfectly harmless but can cause a reflex jump and perhaps a scream if you happen to flush one out from a daytime hiding spot. The Big Island of Hawaii offers an abundance of suitable land for the bat. 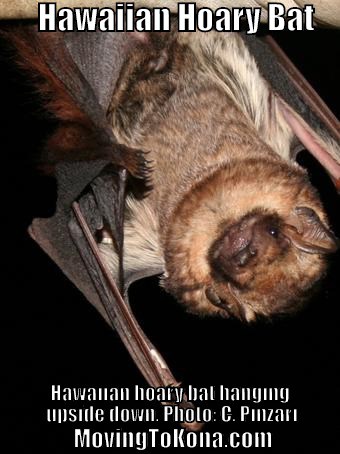 The Hawaiian Hoary Bat is listed as endangered due to apparent population declines, and a lack of knowledge concerning its distribution, abundance, and habitat needs. Recent work indicates that the bat may be more widely distributed than previously believed, undergo altitudinal migrations and may display seasonal variation in activity and habitat use patterns,

This endangered species is present in many landscapes that include lands used for agriculture, grazing, and residential areas, and may be impacted by land use activities and modifications.

Like all bats, the  Hawaiian Hoary Bat is nocturnal and they are solitary tree roosters, attaching themselves to the tips of branches on a tall tree. Weighing in at only ½ oz, these little acrobats are hard to find and even harder to study. Mist nets, the kind used to catch and study songbirds, are not very effective when catching bats, as the tiny mammal quickly learns to avoid the net.

How Is Cell Phone Coverage In Kona & The Big Island?