Beach, Kona No Comments
Mahalo For Sharing Your Aloha

Mainlander Version: “Looks like a nice sandy beach. Gawd, I hope there is parking.”

Hawaiian Version: The beach is warm and welcoming and there is a history of our people. In the Hawaiian language, la’a loa means “very sacred.” Several Hawaiian archaeological sites are in the area. The ruins of haukalua Heiau (an Ancient Hawaiian temple) are on a point just south of the beach, at the parking lot which was added in 2000. The stone structure was cleared and restored, and a small ceremonial platform (lele) constructed by the original people who traveled to Hawaii.  Let’s enjoy and share our beach with our ‘ohana and our visitors.

A Beach For Tourists, A Beach For Locals: Magic Sands is a compact beach, but it is a bit like a Swiss Army knife offers: Bathrooms, lifeguards, tight, but adequate if you get there early, parking, classic white sand, iconic palm trees providing both great ambiance and shade, generally gentle waves, laid back, friendly locals.

This is an awesome ‘local’ beach that is a rare find near Kona because there is actually white sand covering the lava rock. If you know San Diego County, this beach is a cross between Moonlight Beach and Beacons Beach.

Just so you know, it isn’t the best beach on the Big Island but is the best beach with nearby access to Kailua-Kona. It is one of my favorite beaches.

Locals Tip: The sand is just a 6″ to 20″ layer on top of lava rock. The best, safest place to enter the water is in the middle, right in front of the lifeguard tower. For most swells, you can line yourself up using the lifeguard tower and the rock fence wall on the condominium complex just to the north.

Just Why Is It Called ‘Magic Sands?’  It is called ‘Magic Sands’ since the sand, poof, like magic, can immediately disappear when there is a large storm (several times a year), and all the sand is swept off the beach. Later the sand returns, via wave action, after the storm.

Also known as “Magic Sands” or “White Sands Beach”, the official name is “Laʻaloa Beach County Park”. During calm weather, it is one of the only fine white sandy beaches in the Kailua-Kona area.  A strong surf break on the shore can be dangerous, but makes it a favorite for bodyboarding by experienced locals, even under moderate surf conditions.

In the Hawaiian language, la’a loa means “very sacred” because there are several Archaeological sites are in the area.

Surf vs. Boogie Boarding: While this beach can rarely offer a surf break, most often the break is hard and fast, and better for boogie boarding.

Snorkeling: If there are any waves at all, skip snorkeling, it is just too rough. If the waters are calm, and at higher tides, there is a reef to just north of the beach.

Turtles: Because there is sand on the beach, this can be a popular beach to see turtles when the beach isn’t crowded.

Friendly People: When you arrive at Magic Sands you will instantly notice how diverse all the people are. There are local Hawaiian kids, there are tourists speaking their native languages, there are longtime locals, and people new to the island. We struck up a conversation with a woman in the water. She was probably in her early-50’s and had her boogie board with her. She told us that her and her husband moved to Kona about 15 years ago and now she comes to this beach about four or five times a week. She said when she arrived she knew no one and now she has struck up friendships with others that come to Magic Sands. They have get-togethers, barbeques, and beach meetings. She said she learned the meaning of Aloha on this beach.

Locals Tip: Just before you arrive at Magic Sands Beach, there is a parking lot on the east side of Ali’i Drive. You can see the open space in the picture below. 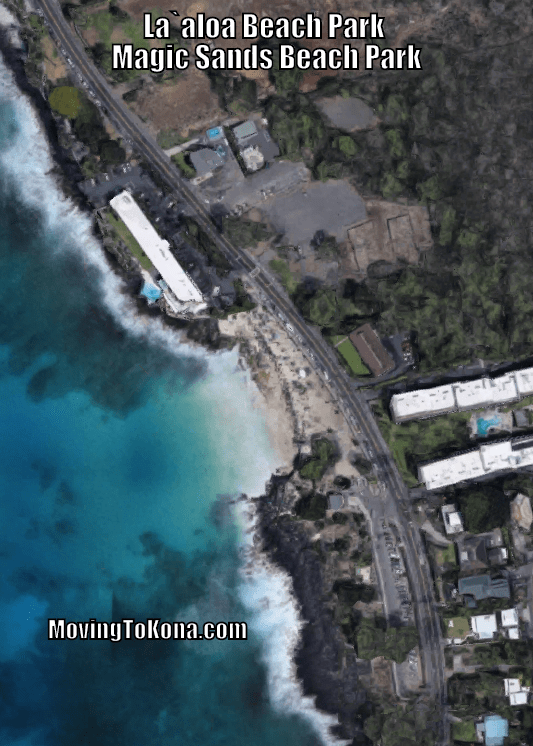 For more information call the County of Hawai`i Department of Parks and Recreation at (808) 961-8311.

Magic Sands can sometimes have a major swell.

Just What Is Aloha?