Big Island, Geology, Volcano No Comments
Mahalo For Sharing Your Aloha
Aloha - What You Will Learn About Hualalai

What’s In A Name? Only a few (famous) people can be known by only one name – Adele, Oprah, Bono, Cher, Ronaldo, Sting, Neymar, Kobe…

Hualālai Information: Hualalai is a shield volcano. Hualālai stands at 8,271 ft (2,521 m) with a prominence of 3,071 ft (936 m).  It is the westernmost of the five major volcanoes which form the island of Hawaiʻi. It is the third most active volcano in Hawai’i. Being in the post-shield stage of development, Hualālai is overall much rougher in shape and structure than the more youthful Mauna Loa and Kīlauea.

Sunrise Over Hualalai:  She looks so peaceful from downslope to Kailua Kona, but read below to find out what lurks below her slopes. 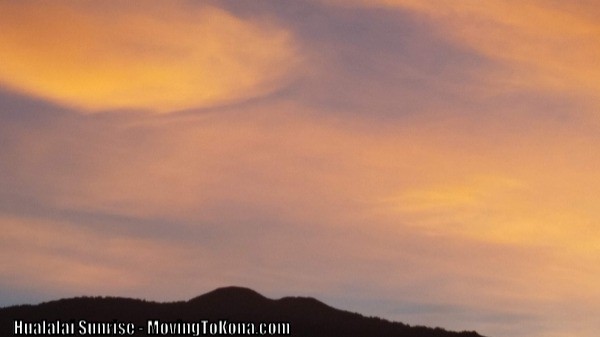 Big Island Volcanoes: Of the Big Island’s five volcanoes, Kohala and Mauna Kea are considered dormant, last erupting 60,000 and 4,500 years ago, respectively. For Kona area residents, note that Hualalai hasn’t erupted since 1801; Mauna Loa is considered active but has not erupted since 1984. Kilauea has been very active. 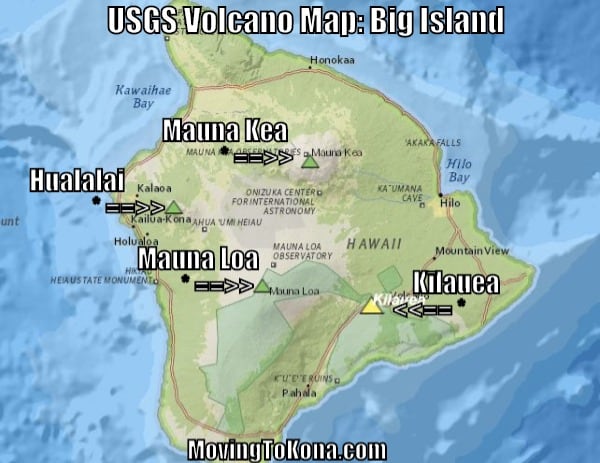 How Many Volcanoes Are There On The Big Island? Which Ones Are Extinct, Dormant, Or Active? Five volcanoes make up the island of Hawai`i: Kohala, Mauna Kea, Hualalai, Mauna Loa, and Kilauea. There is also Loihi, a submarine volcano, is 15 miles (24 km) southeast of the island and 3,178 feet (969 m) below sea level. Loihi will probably not reach sea level before 250,000 years or more. Seismicity, geothermal vents, and fresh lava indicate Loihi is active.

What Are The Big Island Hawaii Lava Risk Zones? The 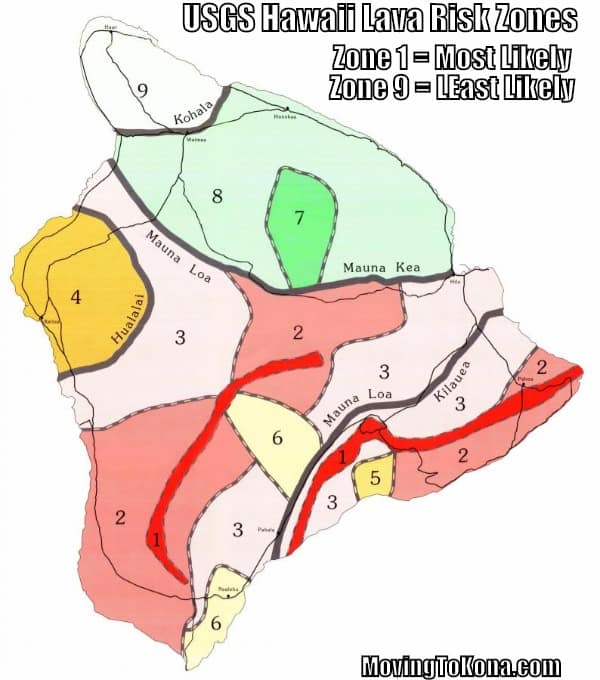 USGS – Why Your Favorite Volcano Is  Dangerous: While Kilauea is the most dangerous volcano in the United States, and Mauna Loa is #16, not to be left out, Hualalai comes in at #23.

USGS scientists have classified 18 U.S. volcanoes as “very high threat”  because of what’s been happening inside them and how close they are to people. The U.S. Geological Survey has updated its volcano threat assessments for the first time since 2005. To produce the rankings, the USGS uses a 24-factor hazard and exposure matrix, assessing explosive activity in the past 500 and 5,000 years, frequency of eruptions, and the level of impact an eruption could have on local populations, airplanes, transportation, and power infrastructure.

When Did Hualālai Last Erupt?  Hualalai last erupted just over 200 years ago. Hualalai erupted seven times in the last 2,100 years. The only historical eruptions were in 1800 and 1801. Mauna Loa last erupted in 1984 and sent flows towards Hilo. Kilauea has been erupting since 1983.

During the last Hualālai eruption of 1800–1801 a very fluid alkalic basalt lava flows that entered the ocean off the western tip of Hawaiʻi island, north of downtown Kona. Although five vents were active at the time, only two produced flows that eventually reached the ocean. 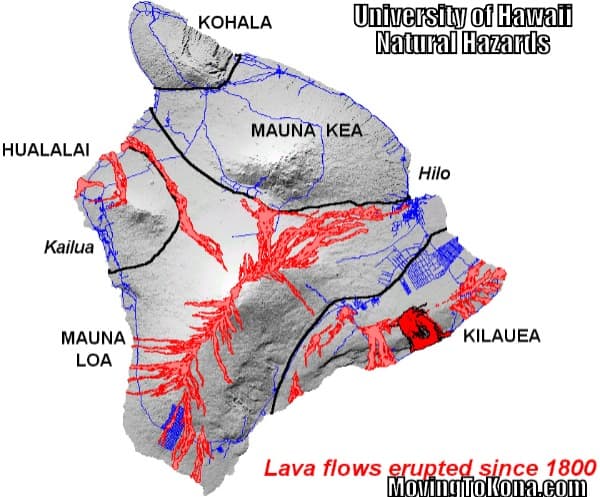 Where Did The Lava Flow During Its’ Last Eruption? A closer look at more recent lava flows from Hualalai. 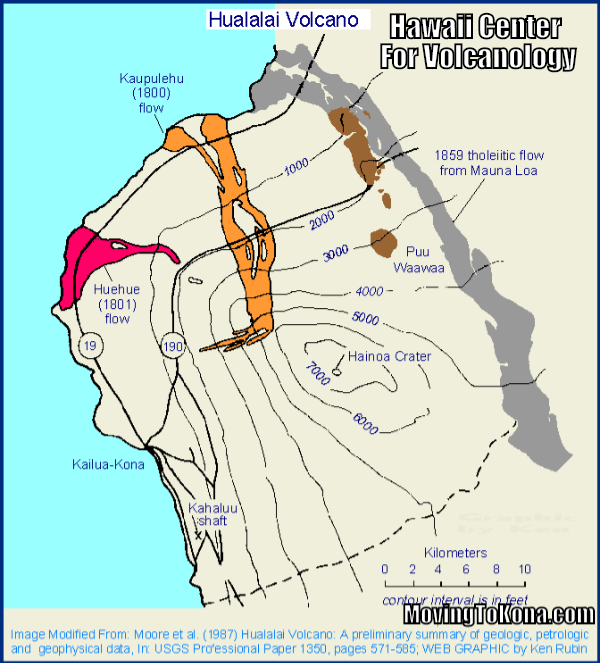 Other Hualalai Eruptions: Hualalai volcano is composed of three rift zones, dotted with cinder cones and spatter cones, trend north, NW, and SE, and converge about 5 km E of the summit. Detailed mapping has shown that 95% of the surface area of the basaltic shield volcano is of Holocene age, more than half of the volcano is less than 3000 years old, and a quarter is less than 1000 years old. A historical, USGS, lava flow inundation map is below. 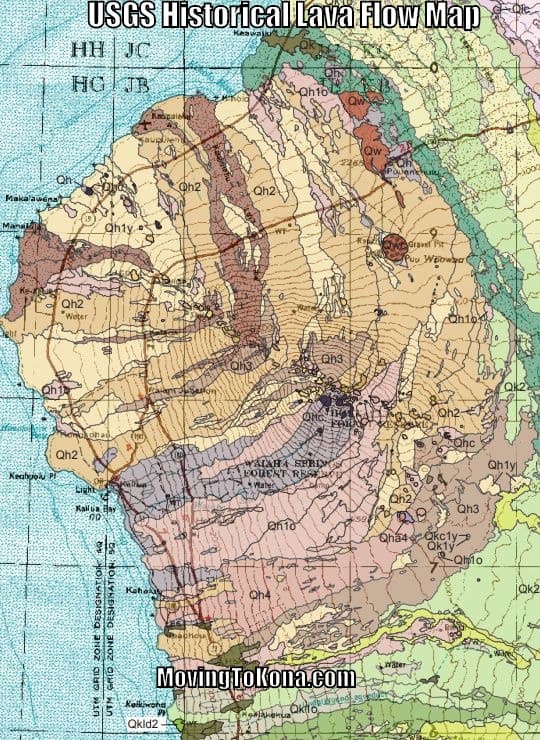 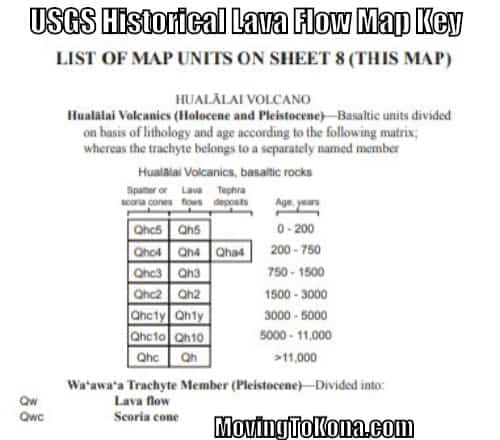 Will Hualālai Erupt Again?  Hualālai is expected to erupt again in the near future, as a 200  to 300-year estimated pause in activity is coming to an end. This presents a distinct hazard to the communities around it as well; for example, in the event of an eruption similar to the 1801 event, Kailua-Kona, which is 15 mi (24 km) from the volcano’s summit, could be covered completely in a matter of hours.

Can You Hike Hualālai?The Bishop Estates owns most of the land on and around Hualalaiand reportedly routinely denies access to hikers but it seems there is seldom anyone there to enforce any claims of ownership.   Again, there may or may not be a notice posted that this is Bishop Estate land so be aware that you might be trespassing. Respect the ʻĀina. To save you the hike, and not trespass, watch the videos below. 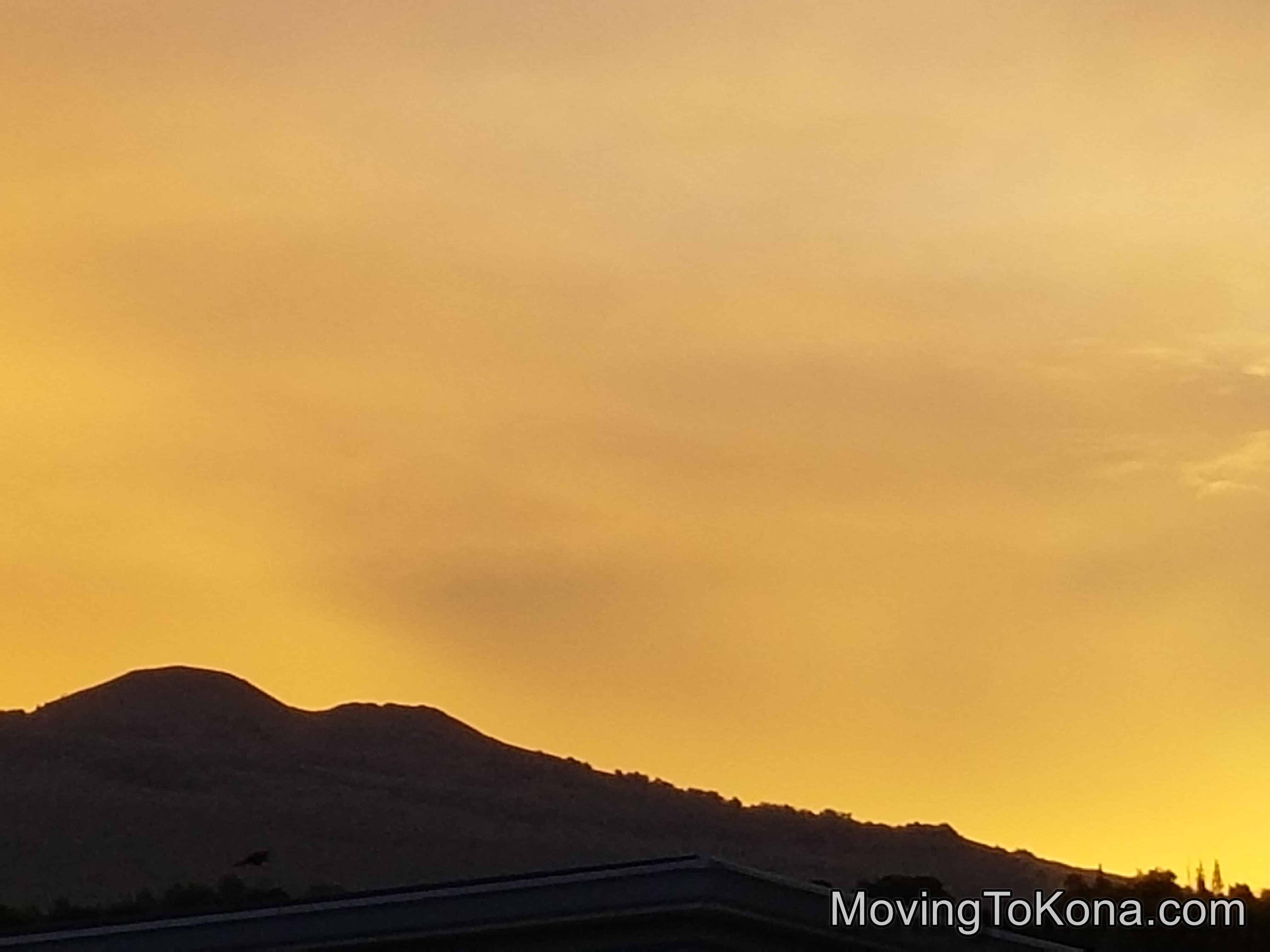 Why The Big Island Is The ‘Youngest’ Island: Pay a visit to Hawaii Volcanoes National Park and you can see fresh lava, days, hours and even minutes old. The Big Island is the newest of all the Hawaiian Islands due to a geologic ‘hot spot’ combined with tectonic plate movement. As the tectonic plates move, they slide over a fixed ‘geologic hot spot.’ This hot spot erupts into a volcano as the tectonic plate moves northwest.  The hot spot remains stationary, while the Pacific plate moves in a northwesterly direction at a rate of approximately 2 to 4 inches per year. 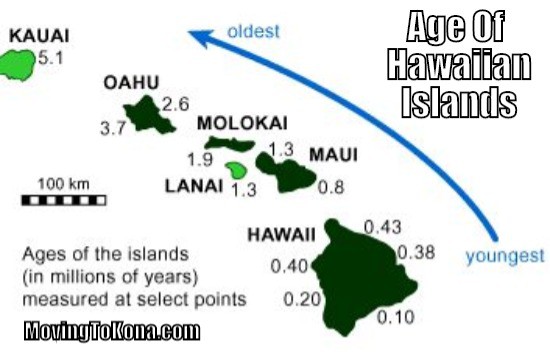 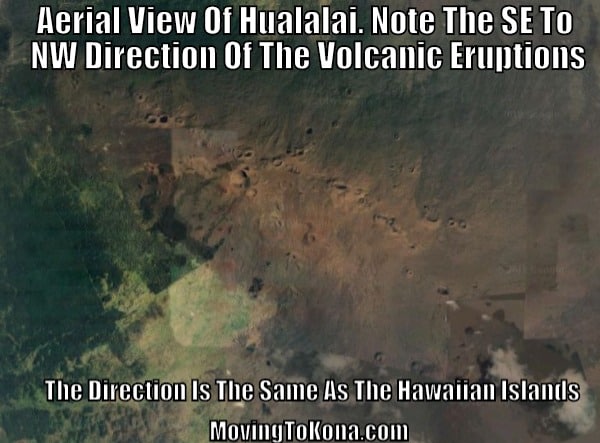 Read How The Hawaii Volcanic ‘Hot Spot’ Created The Hawaiian Islands for a detailed explanation of how the ‘Hot Spot’ works.

Here is an educational video about the Hawaiian Islands ‘hot spot.’ 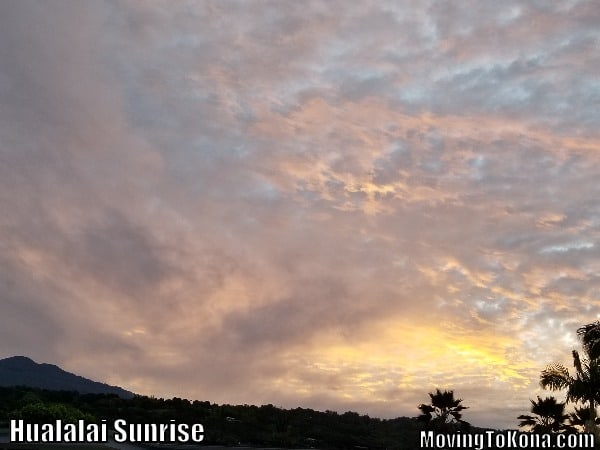 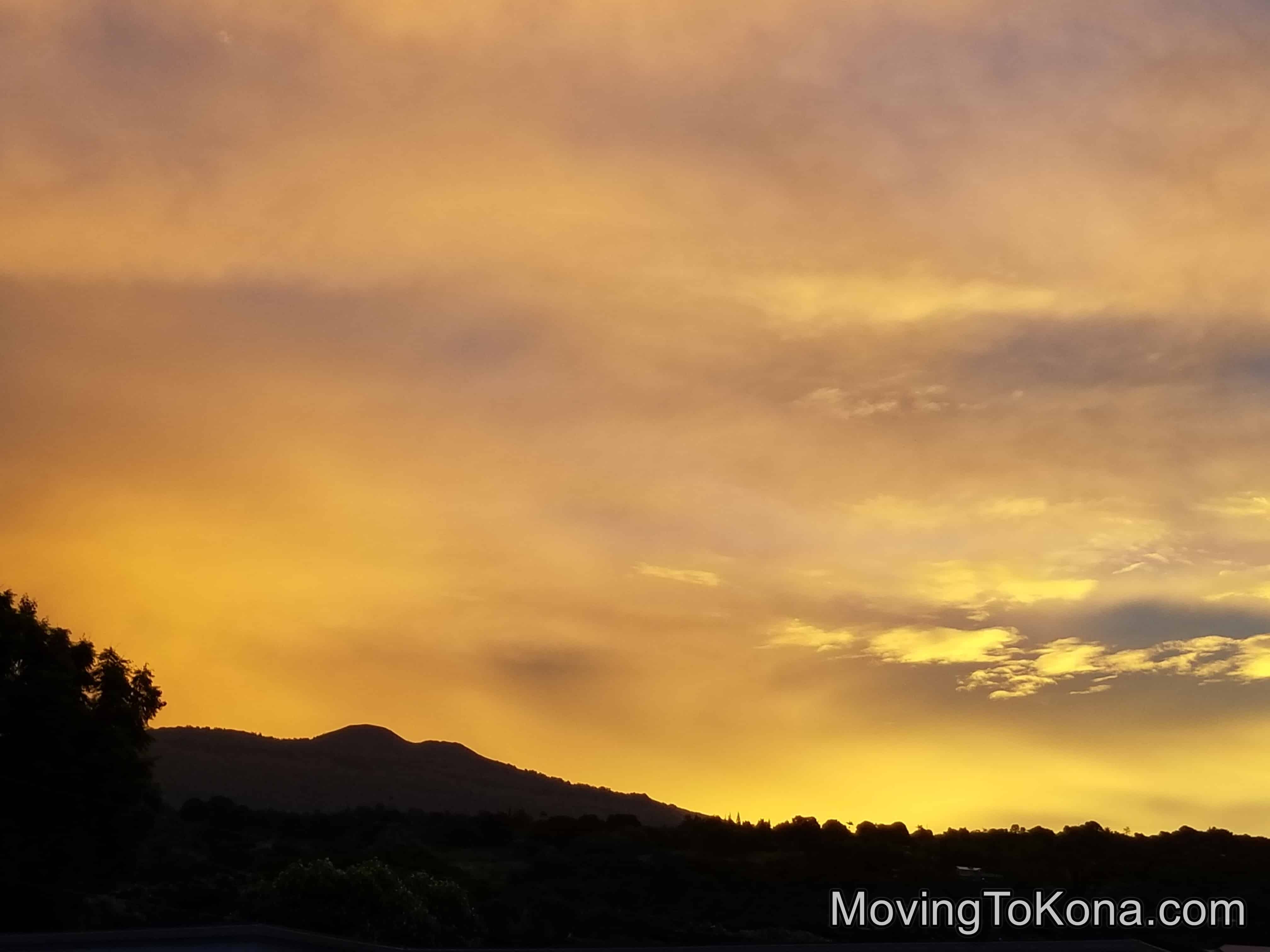