Tourism, Travel No Comments
Mahalo For Sharing Your Aloha

Kona population increases by 50% for the day… 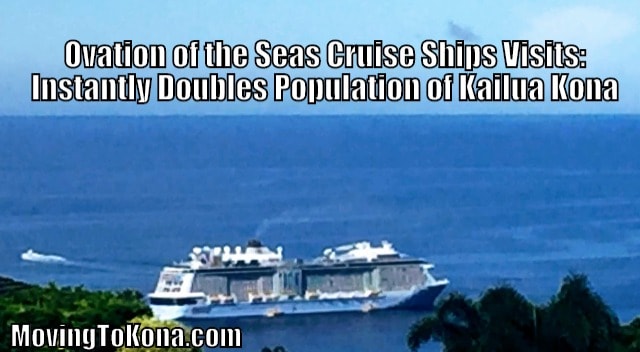 Ovation of the Seas is a Quantum-class cruise ship owned by Royal Caribbean International.

According to West Hawaii Today, “The ship arrived on September 29, 2019, and is the largest cruise ship to visit on Kailua-Kona. The vessels that normally sail into the bay carry an average of 2,500 passengers or less.

Year-to-date through August, total Hawaii visitor arrivals increased +5.2% to 7,117,572, with 76,472 of those visitors arriving to the islands via cruise ships.

The arrival of the Ovation of the Seas is great news for the state of Hawaii as a whole, which has seen an increase in visitor numbers and visitor spending in 2019 compared to the previous year.

Statistics released by the Hawaii Tourism Authority on Thursday said visitors to the Hawaiian Islands spent a total of $1.5 billion in August, a 6.3% increase compared to August 2018.

During the Kilauea eruption, the 2,000-plus passenger ship, the Pride of America, canceled more than a month’s worth of weekly visits due to poor air quality. Island of Hawaii Visitors Bureau executive director Ross Birch estimated at the time that each skipped visit amounted to a loss of $175,000 in revenue for West Hawaii.”

Ovation of the Seas Facts